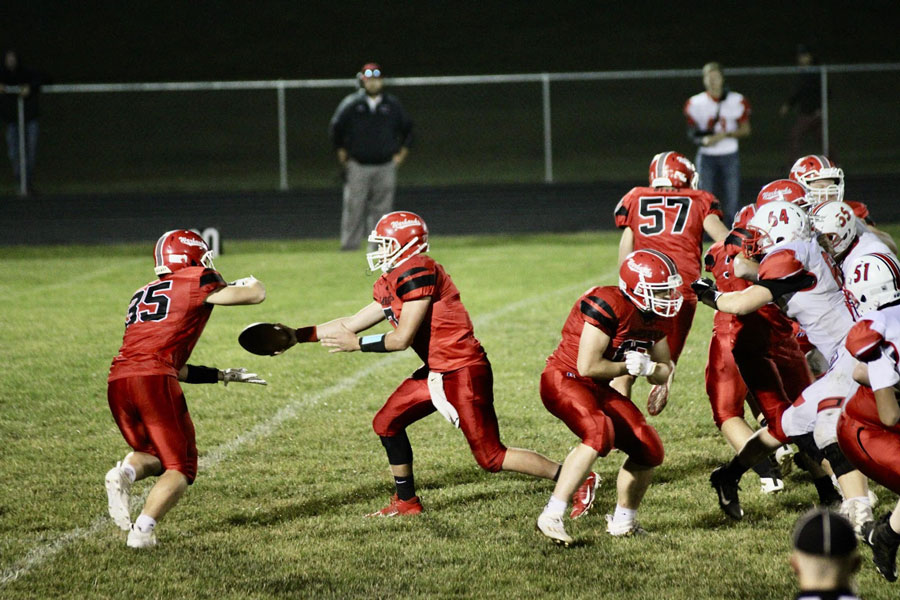 BELLE PLAINE – North Mahaska had some big plays on offense Friday against the No. 2 team in Class A District 7, Belle Plaine, but the host Plainsmen made more plays in a 52-14 victory. Blake Readshaw ran a kickoff return back 70 yards for a score and Dominic DeBoef reeled in a 78-yard pass for another to lead North Mahaska.

Belle Plaine scored twice in the first quarter, then added another score and 2-point conversion to lead 24-0. Readshaw lit up the North Mahaska faithful when he returned the kickoff back for a score. The extra point attempt failed and the Warhawks trailed 24-6 at halftime.

Belle Plaine (4-1) behind the running of Luke DeMeulenmaere scored three more times in the third quarter to put the game out of reach. DeMeulenmaere carried the ball 26 times for 338 yards with five TDs, the longest for 88 yards.

DeBoef, who is tied for first in the district in touchdown pass receptions, hauled in an aerial from quarterback Sam Terpstra. Terpstra finished the night 9-for-23 for 173 yards. DeBoef accounted for 141 yards on four receptions.

DeBoef and Readshaw also keyed the defense. DeBoef recovered a fumble and Readshaw intercepted a pass.
Belle Plaine accumulated just nine yards passing but rushed for 479 as a team.

Dominic DeBoef (35) takes the ball from quarterback Sam Terpstra for North Mahaska in a recent game.

North Mahaska (1-4) is tied for third in the district. They hope to improve their postseason position this week when they host BCLUW for homecoming. They will close out the season Oct. 9 with an expected game with Lynnville-Sully (1-3). However, the Hawks have had two games cancelled due to COVID-19. At press time it is unknown if that game will take place.