NM Advances in 1A Volleyball 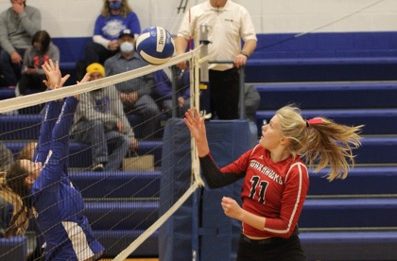 For the first time in more than two weeks North Mahaska had a complete contingent of varsity volleyball players. Though the team struggled at times, the Warhawks defeated host Twin Cedars 25-21, 25-18, 26-24. North Mahaska, 10-9, will advance to the regional semifinals against No. 13 WACO in Wayland.

North Mahaska would build leads from five to eight points only to see Twin Cedars answer back. In set one Nm broke away from a 17-14 lead behind the serving of Madison McKay, who hit her two aces on the night. Layla Hargis put down a strong kill to end the set.

In set two NM was sitting on a set win with 24 points but saw the Sabers rally to within seven before a serving error gave the Warhawks the win.

“As you could see last night, Madi’s arm keeps us on top of most matches whether it’s at the net or from the service line.,” said coach Jim Woods. “She will be sorely missed next season. 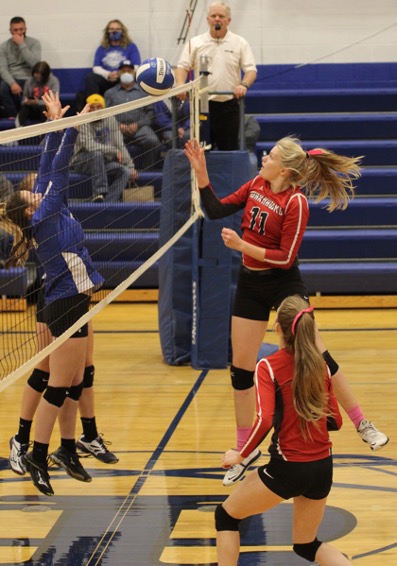 North Mahaska’s Breanna Fogle returns a ball over the net and over the top of two Twin Cedars defenders in their Class 1A regional match Monday.

“I was so happy to have the entire team back on the court. It’s been awhile since we’ve seen that. That being said, we were a little rusty when it came to defensive assignments and serve receive. It may not have been pretty but it was a win.”

North Mahaska built a five-point lead in the third set but each time Twin Cedars fought back to a two-point deficit. In the closing serves NM led 20-17. The Sabers closed to 21-20 but a middle block by Breanna Fogle made the score 22-21. Jalayna Shipley served an ace and Hargis recorded another kill to sit on match point. The Sabers tied the score and Nm took the lead on a sideout. McKay struck down a kill from the left side and gave the Warhawks the win.

Fogle had a strong night at the net with four blocks and eight kills. Shipley led the team in digs with 27 and Zoe Deucore had 14.

“Breanna had four legit blocks very proud of her net defense.,” said Woods. “Jalayna was a digging machine due to the fact that unfortunately, Madi is the only one with a kill swing.

“Where we run a 6-2 offense with vertically challenged setters (due to lack of personnel) our middles are forced to single block. They run their tails off trying to cover both the opponents’ middles and outside hitters.”