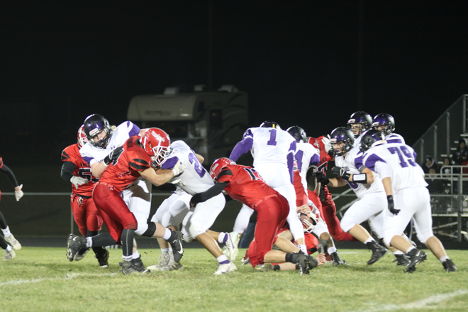 NV quarterback Nathan Russell hooked up with Boston DeVault on pass plays of 27, 4 and 8 yards respectively to key the win. Adam Ayase added a 2-point conversion to complete the scoring.

The teams traded miscues and penalties in the first quarter before the Wolverines were able to find the end zone twice. North Mahaska’s ground game could get no traction with a solid defensive effort pinning down the fleet-footed Warhawks.

Nodaway Valley amassed 322 yards in offense to 45 for North Mahaska. The Wolverines rushed for 216 yards and 106 through the air. Ayase rushed the ball 24 times for 135 yards. His brother Tony carried 12 times for 85.

North Mahaska’s Chase Grandia (13) puts Tony Ayase of Nodaway Valley in his grasp as Dylan Klinker comes in to help.

Sam Terpstra went 9-for-13 passing for 73 yards but the rushing attack was held to negative yards. Blake Readshaw caught two balls for 33 yards and Nash Smith had three for 25 yards. Dominic DeBoef caught two and Matthew Goemaat and Drayton DeBoef each caught one.

North Mahaska ends the season 3-5 and as one of the teams who was able to compete the entire season. The three wins were the most for a Warhawk team since the 2016-17 campaign that went 4-5. They also defeated Lynnville-Sully for the first time since 2009 in the final regular season game.

Nodaway Valley advances to face Earlham on Friday. Earlham advanced when Wayne of Corydon was unable to field a team Friday. That game will be played in Earlham.