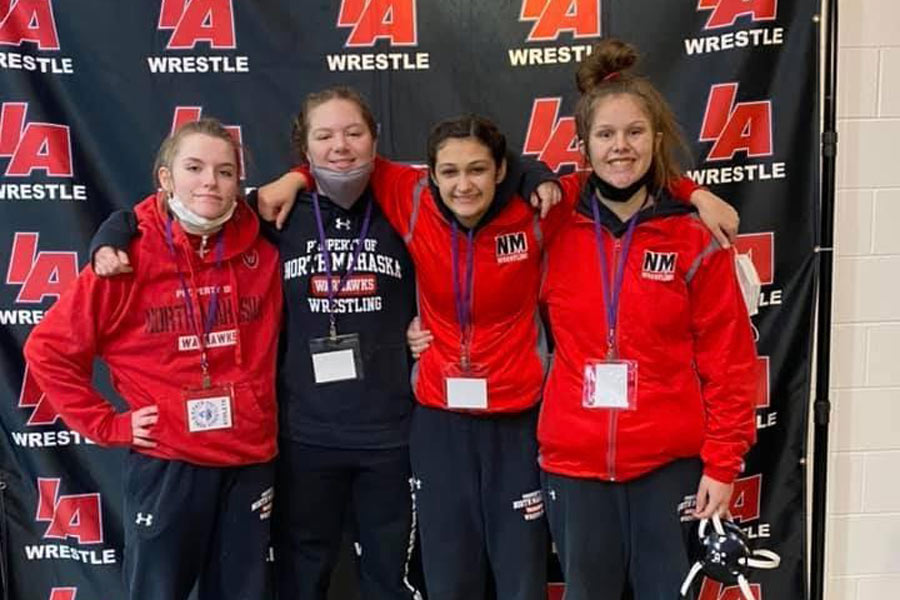 Four girls from North Mahaska represented the Warhawks at the Iowa Wrestling Coaches and Officials Association state meet in Coralville Friday. The meet is the only state wrestling meet specifically for girls. The sport is not formally recognized by the state’s girls’ sports association.

A freshman and three sophomores took to the mats along with nearly 500 girls seeking a state title. Lauren Basicilio, a freshman at 126 pounds, wrestled along with sophomores Jalayna Shipley (120), Libby Groom (152) and Abigail Moore (160).

“The outcome wasn’t what we wanted but they experienced it and know what to expect for next year,” said coach Erica Groom.”

Shipley opened the day facing Emma Strayer of Ottumwa. Strayer scored a pin in 1 minute 4 seconds. Then moved into the consolation bracket. Shipley came back to pin Humboldt’s Mya Vote in 3:03. In her match against Central City’s Lexi Hennick, Shipley was pinned ending her day.

“Jalayna wrestled tough but her lost her first one,” said Groom. “She came fighting back and pinned her second girl. Unfortunately, she was pinned in her third match.”

Basicilio was pinned in both her matches.

“Lauren went out there with a fight but lost her first two matches going 0-2,” said Groom. “She has a lot of heart and can’t wait to come back next year.”

Groom was making her second appearance at the state meet. She was within one round of placing before her day ended. She received a bye in the opening round. She advanced to face Haiden Snyder of Waverly-Shell Rock and came up on the short end of a 6-2 decision. She received a bye in her first consolation match then faced Eastern Dubuque’s Kiya Steger and was pinned in 5:08. In Groom’s final match she had a 6-1 lead when Steger was able to turn her and get the pin.

“Abigail went 0-2 today as well getting pinned in both matches,” said Groom. “She got put in many hard positions but put up a good fight.”

The girls were back on the mat with their team Saturday at Colfax-Mingo.