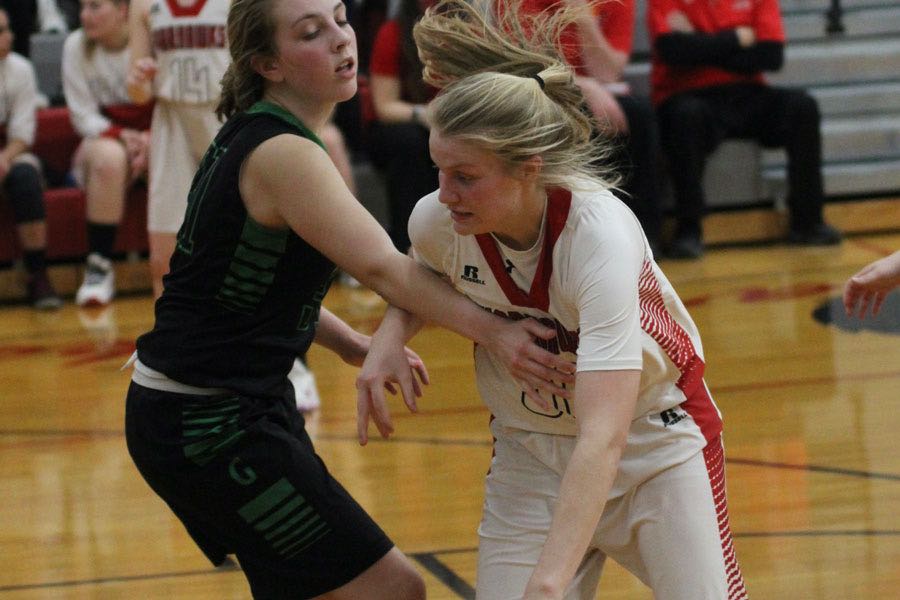 Grand View Christian had a plan to limit North Mahaska’s inside-outside game in its Class 1A Region 6 basketball game Thursday. The Thunder were somewhat successful early but then Breanna Fogle took over.

Fogle took the ball to the rack for seven points in the first quarter, half of her 13, to spark North Mahaska to a 55-32 victory. Much of the Warhawk success came at the free throw line as fouls caused Grandview to go to its bench early. North Mahaska went 17-for-23 at the line while GVC shot 5-of-10 at the charity stripe.

“Bre was a big lift for us in that first quarter and got us going,” said NM coach L.E. Moore. “She worked hard tonight and took the load off the others.”

The “others” referred to Layla Hargis, Addie Schilling and Kaitlyn VanDonselaar. Hargis was not the leading scorer but managed another double-double. She finished with q4 points and 14 rebounds. Schilling led all scorers with 20, grabbed eight rebounds, five assists, two blocks and a steal. Fogle was also credited with eight rebounds and a pair of assists. Moore felt playing a team that had played many 2A and 3A teams was an advantage entering tourney play.

“They are a good team and played a lot of games against 2A and 3A teams,” said Moore. “They were a little more physical than what we normally see. It was good for us to against a team like this to get us ready for (Lynnville)-Sully.”

North Mahaska will host Lynnville-Sully, which defeated Tri-County 52-21 Thursday. They will play at 7 p.m. in New Sharon.

Grandview Christian closes the season at 9-10. They were led in scoring by Hayley Lane with 11. Kelly DeMeulanaere had nine and Sydney Lane added five.