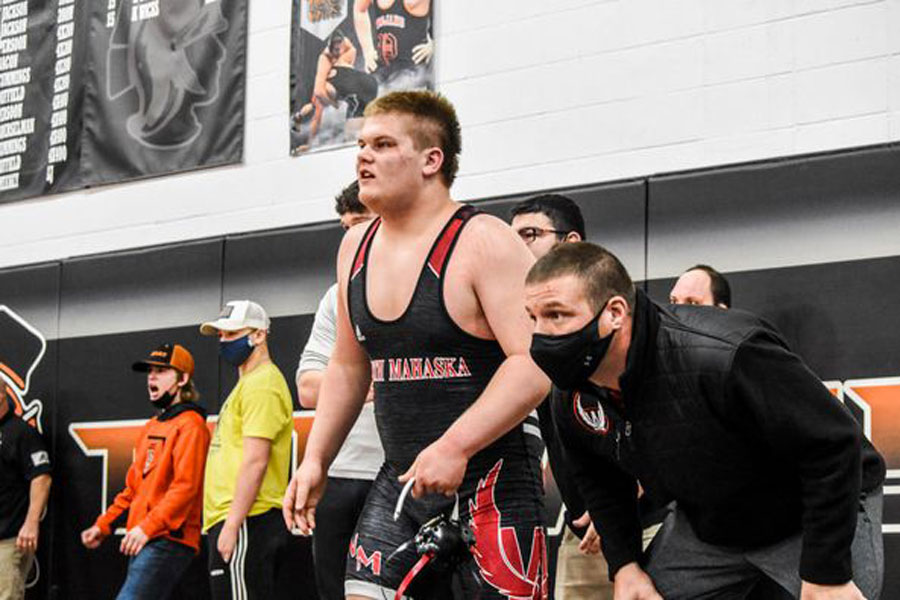 North Mahaska sophomore Trace Goemaat brought the crowd to its feet at the end of the opening round of the state Class 1A wrestling tournament. The 285-pounder used a chicken wing hold, put Don Bosco’s Mack Ortner on his back and secured his spot in Friday’s quarterfinal round. Teammate Paul DeJong lost his opening match 120 but rallied from a 2-1 deficit to win his consolation match. The victories keep the wrestlers in line for a podium appearance on Saturday.

Goemaat, who advanced to state with a second place finish at districts, fought to a 0-0 draw after one period against Ortner. When the whistle began for period two Goemaat fired out and earned a takedown and took just 29 seconds to place Ortner on his back and into the consolation bracket.

Friday morning will bring another test for Goemaat (35-4) as he faces senior Dane Johnson (36-2). The winner advances to Saturday’s semifinals and a shot at a state title. A loss sends the wrestler into the consolation bracket. Goemaat will take the mat Friday as action begins at 9 a.m. If he wins the semifinals will begin at 2:30 p.m. Friday afternoon.

DeJong (28-14), a sophomore, had a tough opening round facing Jace Rose (35-1), a junior from Riverside. Rose scored a takedown and pinned DeJong in 30 seconds. DeJong trailed Ethan Gast of Durant in the consolation match 2-1 entering the final period.

DeJong chose the wrestlers begin the period in the neutral position and quickly scored the takedown and 48 seconds later pinned Gast in 4:49.

The North Mahaska sophomore, who is making his second appearance at state, will await his opponent to be decided in tomorrow’s quarterfinals. His opponent will be either junior Elliott Cooney (44-5) from Nodaway Valley or junior Garrett Funk, a junior from Don Bosco. A win tomorrow will guarantee DeJong a place on the podium.

DeJong will wrestle after the Class 1A quarterfinals are completed.