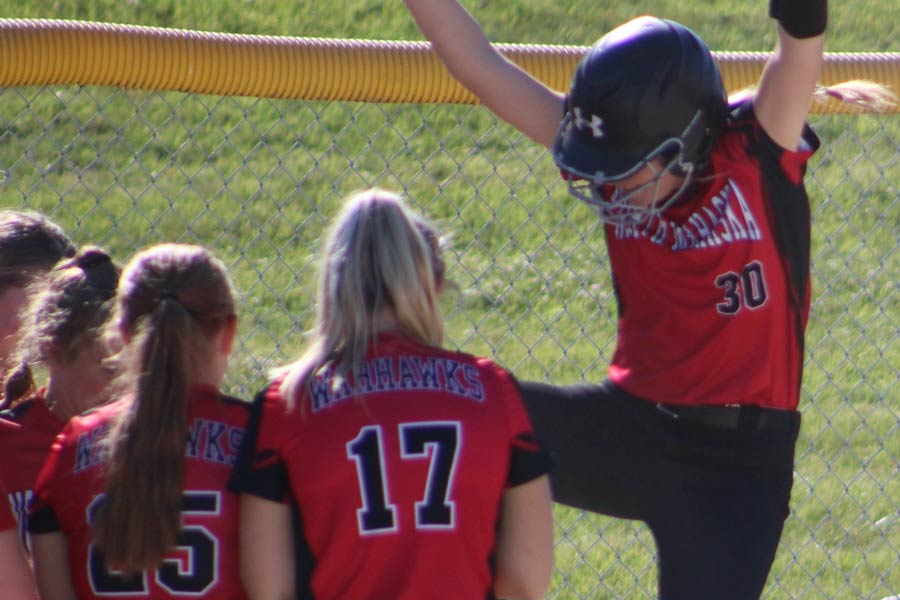 North Mahaska’s softball team continued its hard hitting and using the long ball at its round-robin invitational Saturday. Junior Breanna Fogle hit a homerun in each game and freshman Colby Sampson ripped another as the Warhawks toped Pleasantville, 6-3 then fell to Twin Cedars 5-3.

Pleasantville scored all three of their runs in the top of the first inning after they earned a pair of walks off junior pitcher Morgan Hudson. A double and single allowed the runs to score. Pleasantville had only four more baserunners as Hudson walked just one more batter and struck out six.

“Morgan settled in and did a nice job,” said coach Ashley Schroeder. “Her defense played well behind her.”

With one out in the bottom of the first inning, Regan Grewe singled and Fogle followed with a two-run shot over the leftfield fence. NM tied the game in the second inning after sophomore Jalayna Shipley singled and stole second with two outs. Fellow junior Zoe Deucore, who leads the team in doubles, added another to bring home Shipley.

The fifth inning proved to be detrimental to the Trojan defense. Fogle singled and went to second on a pass ball. Hudson walked and Sampson sent a ball over the fence in left-center. 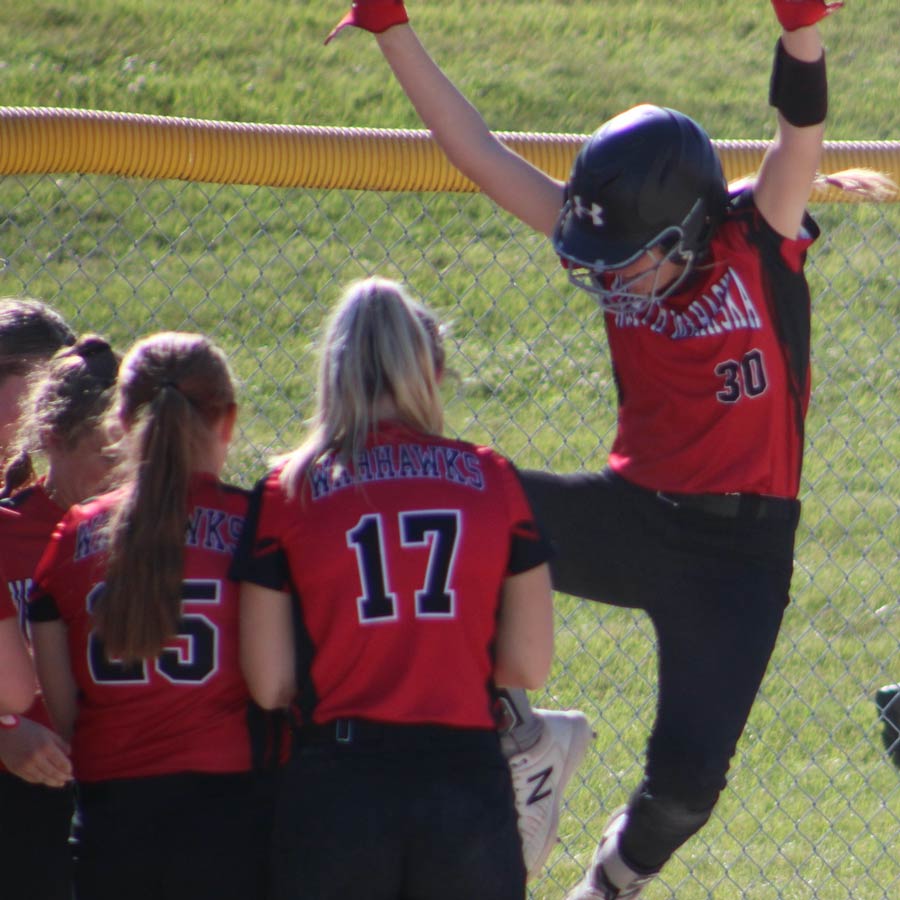 North Mahaska’s Breanna Fogle celebrates with teammates after hitting the first of her two homeruns Saturday at the team’s invitational tournament.

“We are hitting the ball hard right now,” said Schroeder. “We are playing with a lot of confidence even with people in different positions.”

Twin Cedars, who was ranked in the top 15 in the first part of the season hit the ball well and played solid defense against the Warhawks. Cather and leadoff hitter Rylee Dunkin ripped two doubles and a single to drive in three of the Sabers’ runs. TC scored twice in the top of the third inning only to see North Mahaska ties it in the bottom of the third.

With two outs, Grewe, who reached on a fielder’s choice was on first when Fogle again drilled a shot to left that went over to tie the game.

In the fifth inning Dunkin hit a double and went to third on a pass ball. Kenzyn Roberts singled home Dunkin. Roberts reached third on Grace Bailey’s single and scored on a flyout. TC would add an insurance run in the top of the sixth.

Hudson, who pitched both games, helped her own cause with a one-out homerun in the bottom of the sixth. NM had one mor baserunner but could not score.

Hudson took the loss allowing five runs on nine hits with no walks and a strikeout.

North Mahaska (9-7, 7-3) will be home for five games this week. They host Tri-County Monday, Colfax-Mingo Wednesday and league leader and No. 5 ranked Lynnville-Sully Friday. Saturday, NM hosts Baxter and Cardinal in another round-robin tourney.