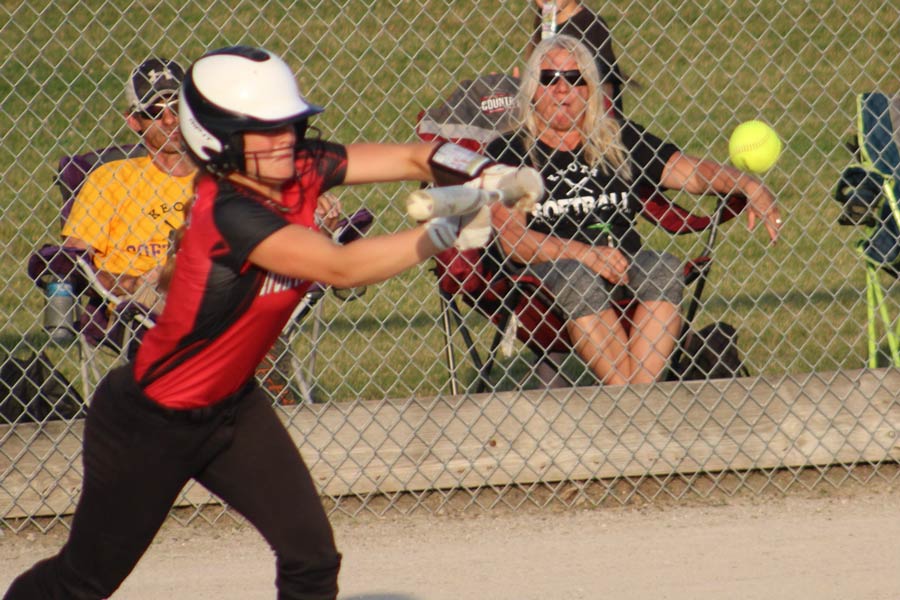 Senior Madison McKay tossed a no-hitter in the first round of the Class 1A Region 5 softball tournament in a 4-1 victory over Keota. McKay struck out 12 while allowing just four baserunners.

North Mahaska (17-10) advances to the second round to host Montezuma (9-20) tonight at 7 p.m. The winner will advance to the regional semifinal in Sigourney Friday.

If there was a downside the win, it was the fact the Warhawks stranded seven runners on base. NM scored two runs in the bottom of the third inning and added two more in the fifth to take a 4-0 lead. A leadoff walk in the top of the sixth inning, a wild pitch and error led to Keota’s lone run.

North Mahaska’s Zoe Deucore bunts for a single in a 4-1 victory over Keota in the opening round of the Class 1A Region 5 softball tournament Tuesday.

“We had some chances to score and could not get the hit when we needed it,” said North Mahaska coach Ashley Schroeder. “We had trouble with this pitcher the last time we played them. She got us to pop up a lot.”

Clarahan walked three and struck out two for Keota. Montezuma advanced the quarterfinal game with a 3-1 victory over Iowa Valley.