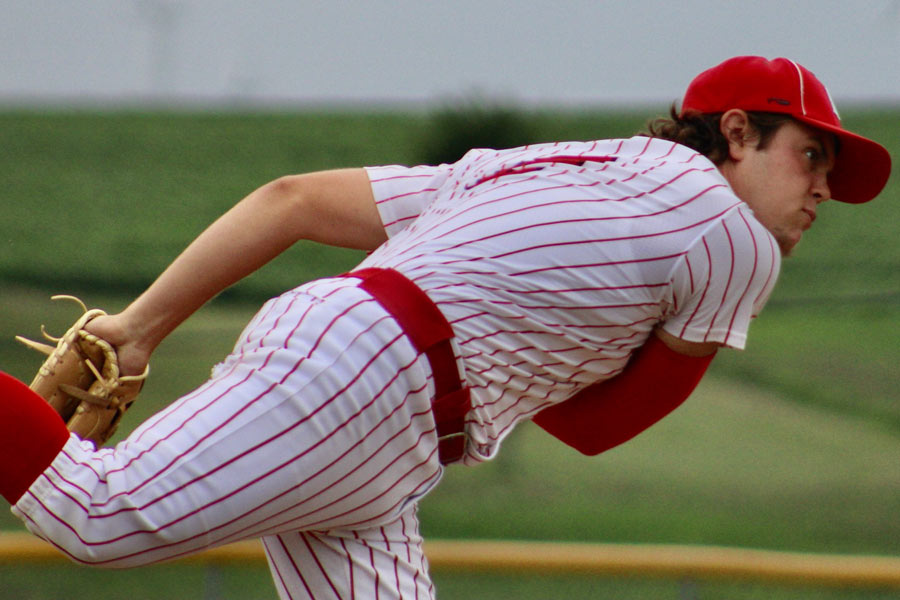 Survive and advance could be the theme for this year’s Class 1A baseball tournament. North Mahaska scored a 5-2 victory over South Iowa Cedar League foe BGM Tuesday in New Sharon. The Warhawks were scheduled to play the game at Lynnville-Sully, but BGM upset L-S Saturday giving the Warhawks a chance to hist the district semifinal.

North Mahaska (21-5) benefitted by an upset of Ankeny Christian (27-5) by Montezuma (13-6) Tuesday and will host the Braves Saturday at 7 p.m. North Mahaska and Montezuma split during the regular season with each team winning on the other’s turf.

North Mahaska banged the ball around early and received a solid pitching effort by senior Ty Kelderman. Kelderman struck out seven of the first 18 batters he faced including striking out the side in the second inning. He also helped the cause at the plate with two doubles and an RBI.

North Mahaska scored a run in the first inning after Dylan Klinker walked with one out. He stole second and dashed home on Sam Terpstra’s single to left. In the top of the third inning, BGM tied the game when Dom Coleman, who had reached on a single, walked home on a bases-loaded walk.

Klinker opened the NM third with a single and scored again on a Terpstra single. Kelderman’s double scored Terpstra and a Dodge Duke single scored Kelderman. NM would add an insurance run in the fourth when Blake Readshaw walked, stole second and went to third on a pass ball. Klinker then drove the ball deep to center and Readshaw scampered home.

Ty Kelderman delivers a pitch against BGM in the Class 1A District semifinal Tuesday. Kelderman struck out eight and hit two doubles with an RBI to help North Mahaska to a 5-2 victory. The Warhawks host Montezuma in the district final Saturday at 7 p.m.

BGM threatened in the seventh inning using a leadoff walk and wild pitch and a double by Mason Maschmann. A pair of groundouts ended the game and sent the Warhawks to the district final.

“Ty and Blake did a great job on the mound tonight,” said NM coach Kevin Kelderman. “Overall, we played good defense and hit the ball hard. There are some little things that have to do better when we are on the basepaths.”

Kelderman pitched the first 4 1/3 innings yielding a run and two hits. He walked four with one of those intentional. He struck out eight. Readshaw finished in relief allowing a run on one hit, two walks and four strikeouts.

In addition to Kelderman, Terpstra had two hits with an RBI. Klinker, Nash Smith and Duke also had singles.

North Mahaska will seek a spot in the substate game to earn a chance at the state tournament. A win over Montezuma will send the Warhawks against either No. 6 Don Bosco (24-4) or Alburnett (26-9). They play at Waterloo West Saturday night as well.