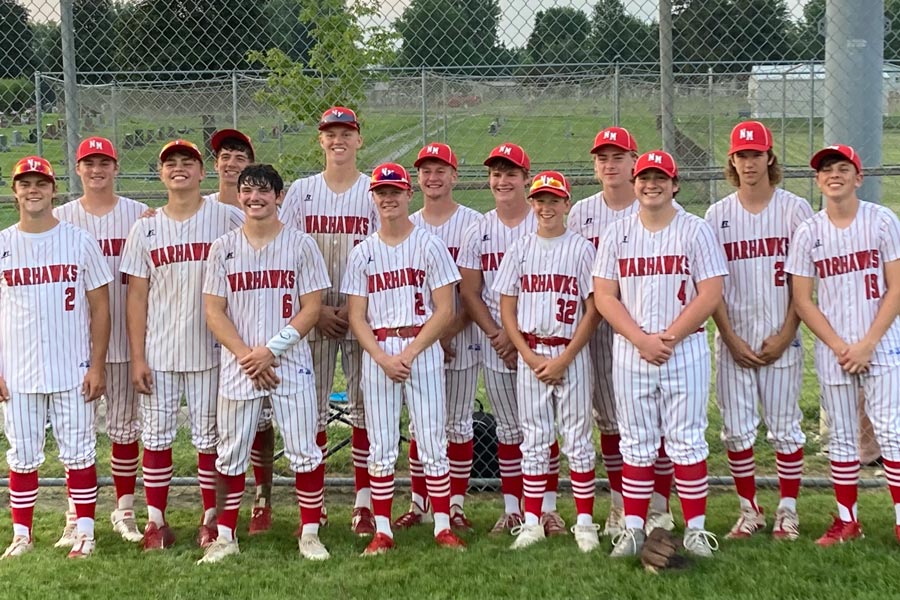 Blake Readshaw and his North Mahaska baseball teammates gather after each game with the phrase “streakin’.” When they said it Saturday night following their 6-0 victory over Montezuma it meant a trip to the substate game and a shot at next week’s state tournament.

“Every time we win, we say streaking’ because that is what we have been doing this season,” said the NM senior who tossed a six-inning no-hitter. “We have been doing that all season.”
Montezuma was the latest victim of the Warhawks who have won the last five games and are 15 of their last 17. The team’s win streaks seem to come in multiples of five, which may reflect on their coach Kevin Kelderman, who teaches math at the school. After starting the season 2-3, they won five, lost a game, won five, lost, then on the current streak.

“Readshaw was key tonight,” said Kelderman. “We didn’t know what we would get. I was hoping to get to the fourth inning. That first inning was key.” 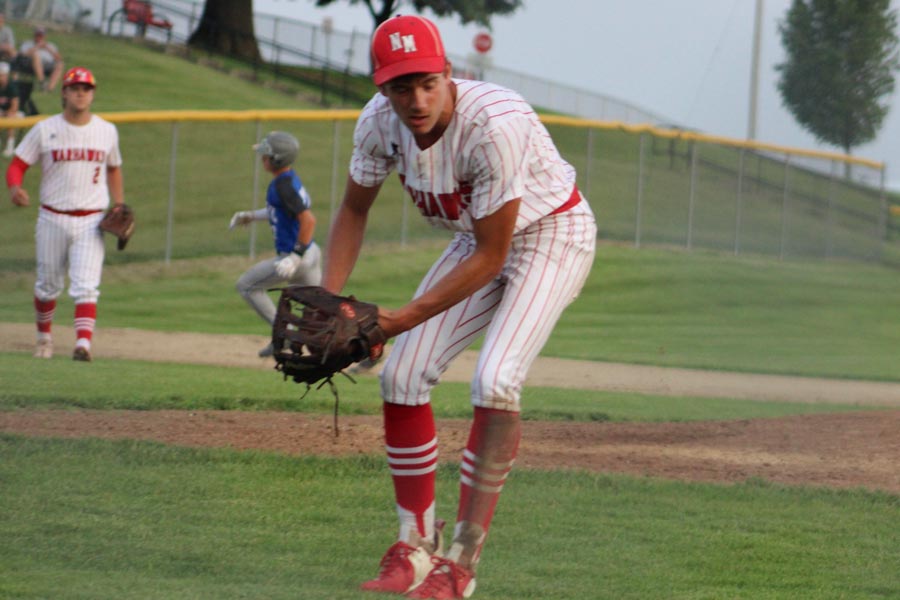 North Mahaska pitcher Blake Readshaw fields a ball for an out in the sixth inning. The senior tossed a no-hitter, doubled and scored twice in a 6-0 shutout of Montezuma.

Readshaw said he was nervous at the start of the game but was able to settle into a groove. He walked the leadoff hitter Cole Wells, who advanced to second on an error and went to third on a long flyout to right fielder Grant Smith after Readshaw struck out a batter. The fourth batter also flew out to Smith to end the threat.

It was Readshaw to lead off North Mahaska’s bottom of the first with a double followed by Dylan Klinker’s bases clearing triple. Klinker scored on a wild pitch and NM took the lead, 2-0. The Warhawks retired the next seven Monte batters in order and allowed only two baserunners entering the top of the sixth.

NM added two more runs in the bottom of the fourth and two in the fifth. Sam Terpstra and Nash Smith hit back-to-back singles in the fourth. Th duo took advantage of a wild pitch, stolen base, a balk and an error to score two more. In the top of the fifth, it was Readshaw reaching on an error and a walk to Klinker to set up Terpstra’s bases-clearing double.
“Our defense was a key,” said Kelderman. “I’m not sure we had an error. These guys made the plays when they had the chance.”

Smiles were aplenty Saturday after North Mahaska shutout Montezuma 6-0 to advance to the substate final against Alburnett on Tuesday.

Readshaw’s no-hitter was a quiet one. He was aware of it. His coach was not.

“I knew it but wanted to make sure we got the win,” said Readshaw.

He reached 106 pitches at the end of six innings, four short of the maximum allowed. Jaydyn Steil was called on to pitch the seventh. With two out he gave up a single before striking out the final batter to end the game and allow the celebration to begin.

“I didn’t realize he had a no-hitter until after I took him out,” said Kelderman. Jaydyn came in and did what we needed.”

North Mahaska collected five hits in the game, but every one of them figured into at least one run. Terpstra hit a single and double with an RBI. Readshaw, Klinker and Nash Smith each had a hit.

North Mahaska (22-5) will travel to Marshalltown Tuesday to take on Alburnett (27-9) for a spot in the state tournament. North Mahaska will be seeking a return to state for the first time since 2005. It will be another chance for the 2021 Warhawks to go streakin’. Game time is 7 p.m.