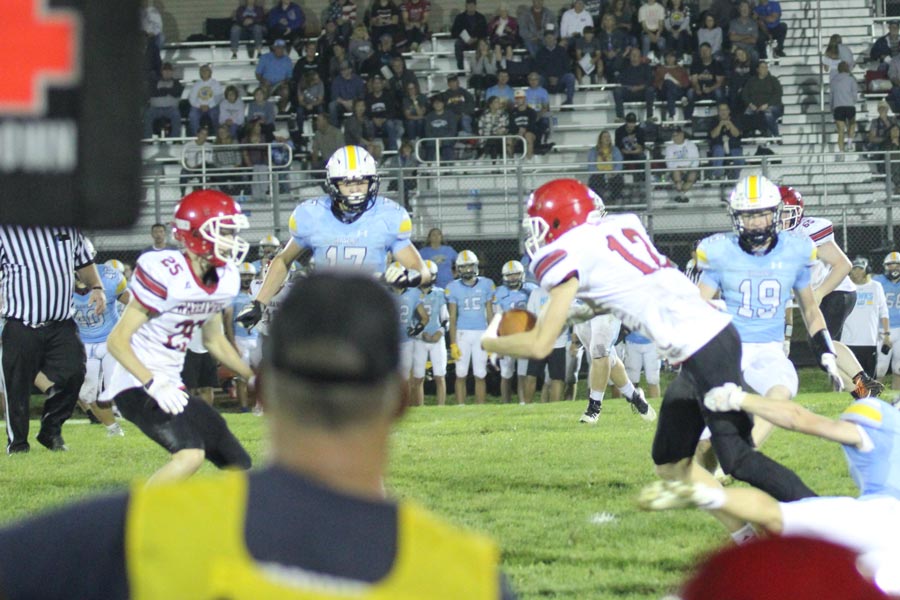 North Mahaska went to Lynnville-Sully for a Class A football game but ended up in a track meet. Despite doing some good things on offense the Warhawks could not compete with L-S speedsters and fell 46-6.

The sprints began early as the Hawks to the opening kickoff across midfield to the NM 47-yard line. Sophomore Corder Noun Harder rushed for 42 yards on three carries then junior Kyle Squiers, who scored three touchdowns on the night, plowed in from the 5-yard line.

A chink in the Lynnville-Sully armor was their inability to consistently hit extra points. The Hawks missed two kick PATs and a 2-point conversion.

“They were just faster than we were,” said North Mahaska coach Phil Griffin. “I thought we did some good things on offense. Our passing game worked pretty well.”

Nash Smith (12) of North Mahaska breaks the last tackler on a fourth down play to roll for 57 yards for a score against Lynnville-Sully Friday. NM fell on the road 46-6.

Griffin’s assessment of the passing game, a facet not really associated with Warhawk football, as they accumulated 173 passing yards on 17-for-26. Quarterback Sam Terpstra also had one interception. Junior Nash Smith accounted for 144 yards on 11 catches.

“I don’t know how many yards Nash had, but he had to be close to 150,” said Griffin. “We just had trouble with containing their runners.”

Smith brought the Warhawk faithful to its feet when NM began the second half trailing 25-0. On a fourth down gamble at their own 43 Terpstra hooked up with Smith for 57 yards. It would turn out to be the only score for the Warhawks.

North Mahaska’s defense negated Lynnville-Sully’s passing game forcing junior quarterback Conner Maston to 0-for-7. The Hawks made up for it on the ground amassing 335 yards on the ground including two 100-yard rushers. Squires led all with 166 yards on 12 carries and scored three times including a 40-yarder. Noun Harder rushed 11 times for 112 yards with two touchdowns.

North Mahaska will host Colfax-Mingo (0-2) Friday. It will be the first home game of the 2021 season.