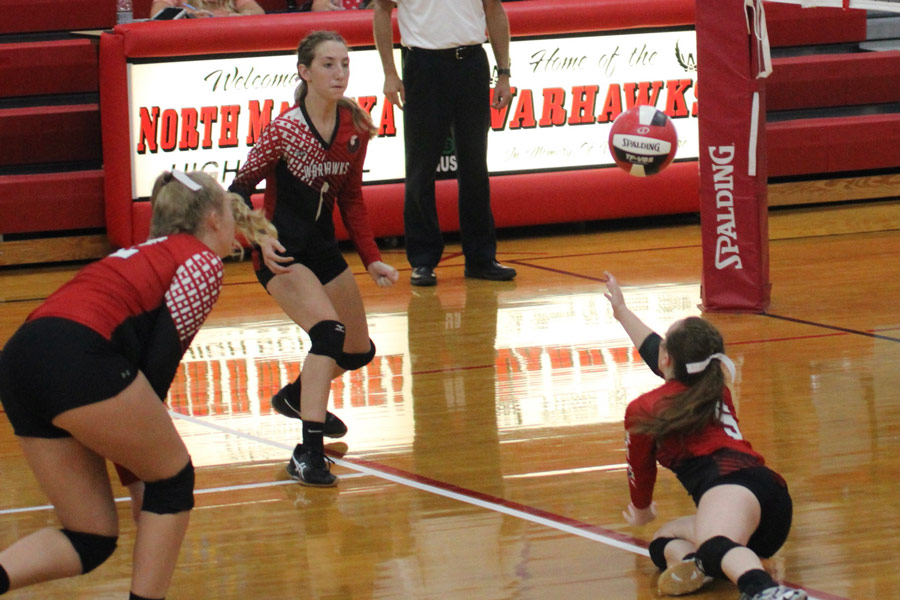 North Mahaska’s volleyball team hopes it set the town for activities at the school this week as the Warhawks celebrate homecoming 2021. North Mahaska (8-7) faced one of its South Iowa Cedar League rivals Lynnville-Sully (4-7) in a hotly contested three-set match with NM edging their visitors 25-22, 25-19, 25-17.

The match games down to runs made by each team. Long volleys were the key with North Mahaska winning five of the eight throughout the match.

“It’s a great way to start homecoming week,” said NM coach Erica Groom. “Everyone was hitting, and everyone worked hard. It truly was a team win.

“Homecoming is a busy week, and we don’t play until our nine-team tournament on Saturday. They worked hard winning those long volleys and digging up balls.”

Kaitlyn VanDonselaar (5) digs up a ball to teammate Carlie Scholtus (6) as Layla Hargis looks on. VanDonselaar had10 digs and five aces to go with Scholtus’s seven kills as North Mahaska defeated Lynnville-Sully 3-0.

Just as potent at the line Monday was Caitlin Sanders who 16-for-17 serving with four aces including three in a 10-point run in the second set.

Sanders was just as deadly at the net earning seven kills as did teammate Carlie Scholtus. Layla Hargis led the team in kills with eight. Much of the credit for the success at the net came from VanDonselaar and Morgan Hudson who contributed 13 and seven assists respectively. 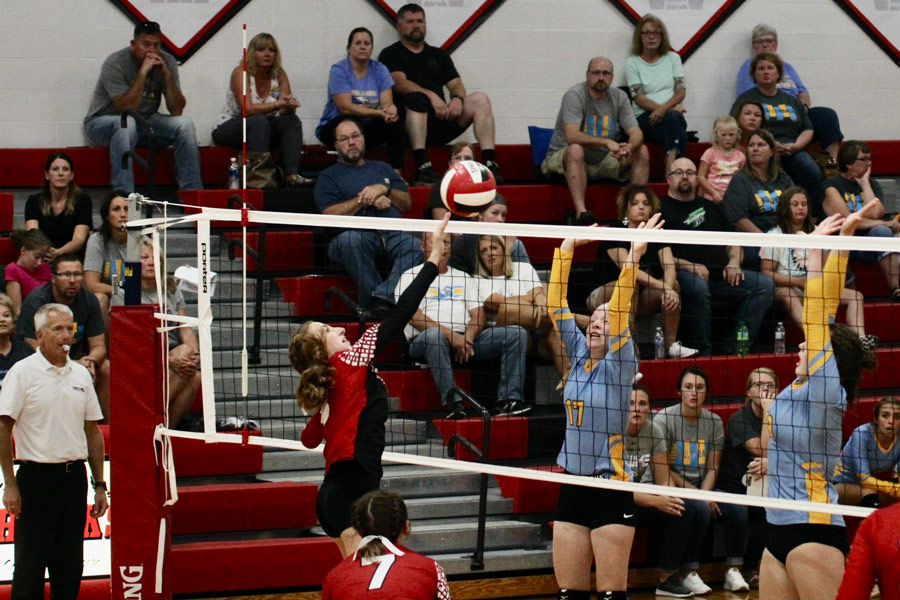 Carlie Scholtus battles at the he net with a pair of Lynnville-Sully Hawks in North Mahaska’s 3-0 victory.

Lynnville-Sully’s offense recorded 17 kills on the night and their power forced the Warhawks to hit the floor to bring balls into play. None did that better than senior Zoe Deucore who had 41 digs.

VanDonselaar had 10 and Hargis dug up nine.

Action at the North Mahaska Invitational begins at 9 a.m. Saturday.