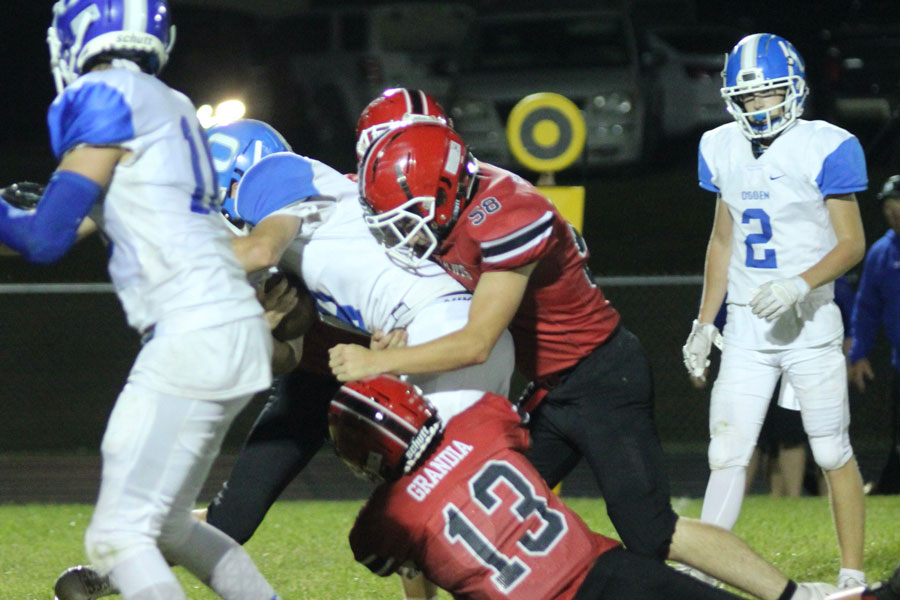 North Mahaska had its hands full Friday night as North Mahaska hosted No. 8 Ogden for homecoming. Ogden used its size, speed and no-huddle offense break away from a 6-0 first quarter lead to win 48-12.

North Mahaska (0-4) battled with Ogden (4-0) in the first quarter allowing a touchdown at the mid-point of the quarter. The

The no-huddle offense got rolling and the Bulldogs added two scores to grab a 21-0 lead. On its final drive of the quarter, NM went 85 yards in seven plays scoring on the final play of the half when quarterback Sam Terpstra plowed in from the 1-yard line.

“I thought we played well against them in the first quarter,” said NM coach Phil Griffin. “They are quick and run the offense fast.”

Penalties again proved a killer stat for the Warhawks. The Warhawks were flagged 10 times for 75 yards including five times in the third period. Procedure calls and delay of game calls kept North Mahaska from moving the ball.

Chase Grandia (13) and Cody Scholtus make a tackle on an Ogden runner for a short gain. Grandia also had a fumble recovery for North Mahaska in a 48-12 loss to Ogden.

“Those are mental errors that can be corrected,” said Griffin. “We talk about those things. It’s tough, they can run a play in 20 seconds, and we have trouble getting one in 40. It is mental and we will work on it.”

North Mahaska continues to surprise with its passing game. In the drive before the half Terpstra and Nash Smith hooked up with pass receptions of 25 and 35. Smith finished with six receptions for 131 yards.

Late in the fourth quarter, Kaleb Stout came off the bench to rush for 60 yards on three carries including a 55-yard touchdown.

“Kaleb had a nice run when we put the subs in,” said Griffin.

An interception for a touchdown by Ogden’s Hunter Meeks went 75 yards for a score and sent the game to a running clock early in the fourth period.

North Mahaska finished with 284 yards in offense to 338 for Ogden.

North Mahaska will play another homecoming game when they travel to 3-1 Belle Plaine Friday as they begin district play.