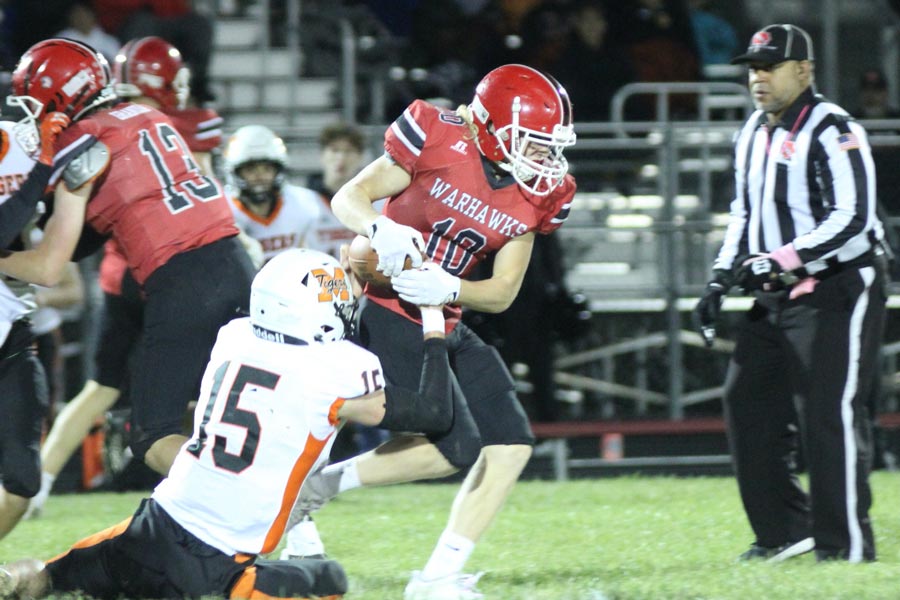 Friday’s season finale for North Mahaska (2-6) was not the outcome sought by the seven seniors. The Warhawks were seeking to pick up its third win of the season. Colfax-Mingo was also rooting for the Warhawks in the contest against Madrid. In the end Madrid took advantage of turnovers and a speedy backfield to score a 21-12 victory. The win also knocked C-M out of the playoffs.

North Mahaska and Madrid could not find the end zone. Madrid (3-5) reached the North Mahaska 11-yard line before being turned away and the Tigers stopped NM at the 23-yard line. North Mahaska was the first to break the goose eggs on the scoreboard when senior Sam Terpstra hooked up with senior Sean Knockel on a 39-yard pass. The extra point kick, which turned into a 2-point attempt failed. 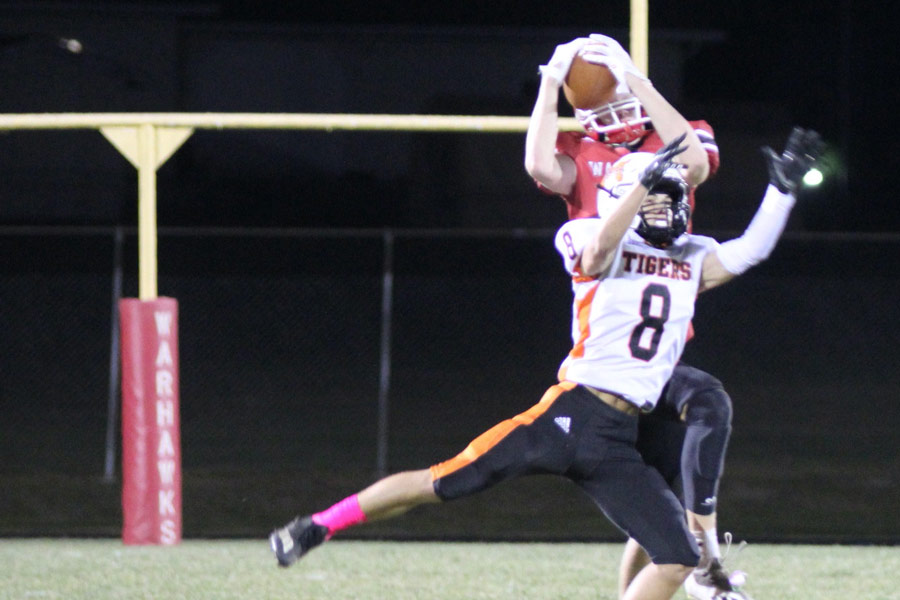 Nash Smith skies for a catch over Madrid’s Jacob Kockler for a big gain.

About five minutes later, Madrid’s duo of Brady Leonard and Matt Fuller hooked up on a 61-yard strike and the PAT gave the Tigers a 7-6 edge. North Mahaska had four possessions in the second quarter after their TD, but three of them ended in interceptions.

Three plays into the second half and Leonard used his wheels to score on a 56-yard run and a 14-6 lead. NM was able to reach deep into Tiger territory, but couldn’t punch it in. With 6:10 to play in the game, junior Paul DeJong, who rushed for 101 yards for the Warhawks, went in from the 1-yard line. The 2-point attempt failed, and NM trailed 14-12.

Madrid took over after the kickoff and began eating the clock with a heavy dose of Fuller. He carried the ball five times for 36 yards. With 1:19 to play Jacob Kockler hailed in a Leonard aerial for a score and time ran out on the Warhawks at the Madrid 14.

“It was might fault on that touchdown in the third quarter,” said NM coach Phil Griffin. “I put a kid in a position he shouldn’t have been. He feels bad, but it was my fault.

“We made too many mistakes tonight. I feel bad for these seniors. They gave us great leadership.”

North Mahaska held the edge in total yards with 351 yards to 282 for Madrid. Fuller led all rushers with 112 yards on 22 carries and the quarterback Leonard was 13 for 72.