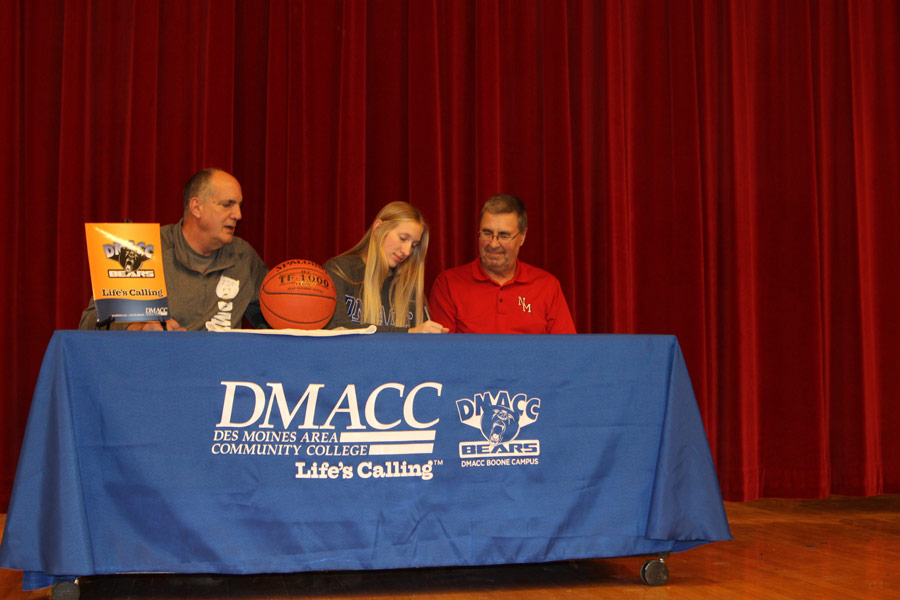 North Mahaska’s Addie Schilling made her mind up on where she wanted to attend college not long after her visit to the Boone campus of Des Moines Area Community College. In front of her coaches, teammates and family, she made it official.

She will take her basketball talents to DMAAC and play for coach Steve Krafcisin. Krafcisin is a former player at North Carolina and four years at the University of Iowa. He has been on the coaching staffs of Loras, Iowa State, University of North Dakota and North Iowa Community College. He headed the women’s program at DMACC since 2005.

“I am really impressed with Coach K,” said Schilling. “I knew this was the place I needed to be when I compared every school to DMACC. I thought I’m not going to find anywhere better because I kept coming back to how I felt there.”

Schilling made her first visit to the campus in March and by May felt she knew exactly where she wanted to go. Krafcisin told those gathered that the National Junior College Athletic Association and COVID changed how many of the signings took place, so it was held off for a while. Schilling is his fourth signee for next season.

Entering her senior season, Schilling has played in 58 games. Last season she averaged 13.5 points per game. In her career she has scored 370 points with 174 rebounds, 139 assists, 66 steals and 25 blocks. She is a 59 percent free throw shooter in her high school career.

Schilling immediately gave credit to her coaches and team.

“Thank you to my coaches and teammates,” said Schilling. “It is because of you I am here today.”