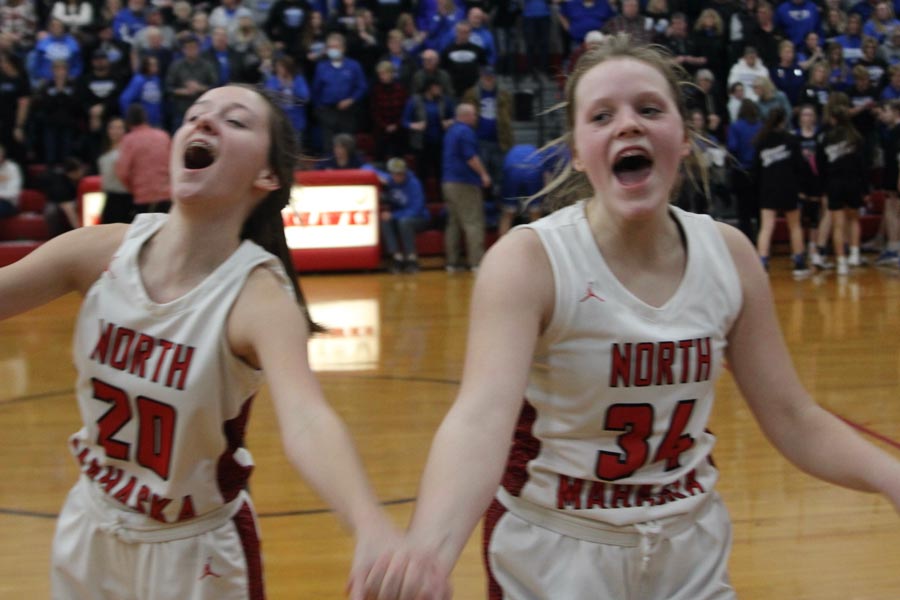 North Mahaska girls took another toward an outright South Iowa Cedar League Tuesday with a 51-40 victory over No. 14 Montezuma. Eighth-ranked North Mahaska rallied from a seven-point deficit using an 11-for-17 effort at the free throw line to take the win.

It was a night when NM played “next player up.” Leading scorer senior Layla Hargis went to the bench several times due to foul trouble and freshman Breckyn Schilling who dropped in a pair of threes in the first half, then added nine more points in the third period, went out with an injury.

Schilling’s sister Addie and senior Breanna Fogle teamed with freshmen Regan Grewe and Kayla Readshaw to pick up the slack.
Grewe hit basket to tie the game at 33-33, Hargis hit a pair of free throws and Fogle hit a layup as the Warhawks built a 37-33 lead. Montezuma went just 1-for-7 at the foul in the final nine minutes.

“We had people step up tonight,” said NM coach L.E. Moore. “Our freshmen really played well. When we needed someone to step up, someone did.” 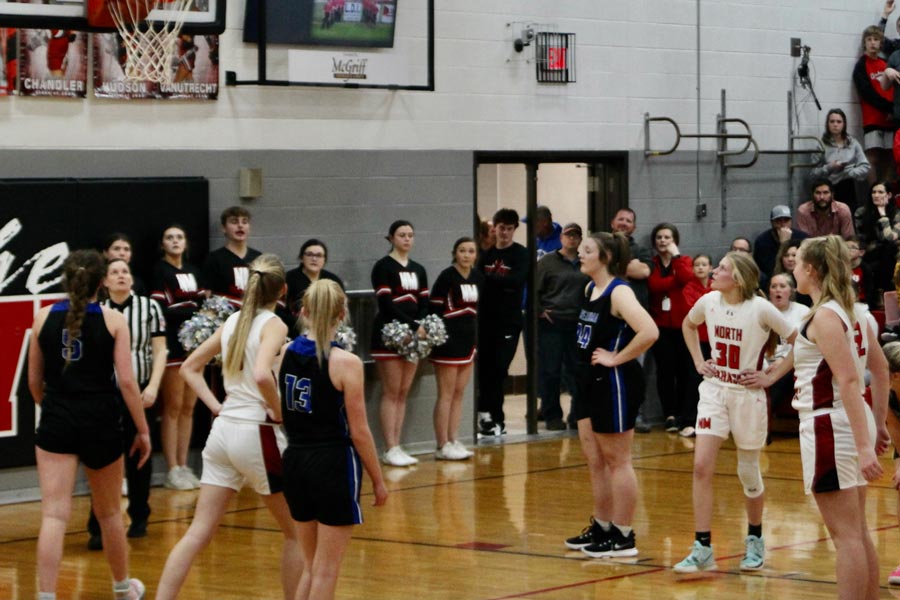 Layla Hargis and her North Mahaska teammates watch as a free throw drops through. Hargis went 6-for-6 at the line in the fourth quarter in the 51-40 victory over Montezuma.

Addie Schilling opened the game with a pair of free throws with 6 minutes 42 seconds to play in the first quarter. Breckyn Schilling hit a three with 40 seconds left to tie the game at 8-8 then Shanae Wetering hit a free throw to take the lead. North Mahaska would not lead until the fourth quarter.

The Schillings accounted for 13 of the 15 points scored before Breckyn went down. Grewe opened the fourth with a layup to tie the game. North Mahaska would hit three buckets while holding Monte to three field goals. The remainder of the game was a free throw contest. NM ended up outscoring the Bravettes 20-7.

Despite being held to eight points due to the double team by Monte, Hargis pulled down 13 rebounds and scored eight points.

Breckyn Schilling, who went down with two minutes left in the third, scored 12 points and blocked a shot. Addie Schilling put up 14 points with three assists and Fogle had 10 points, eight boards and two assists.

Shanae Wetering led Monte with 16 and Jaedon Sharer had 12.