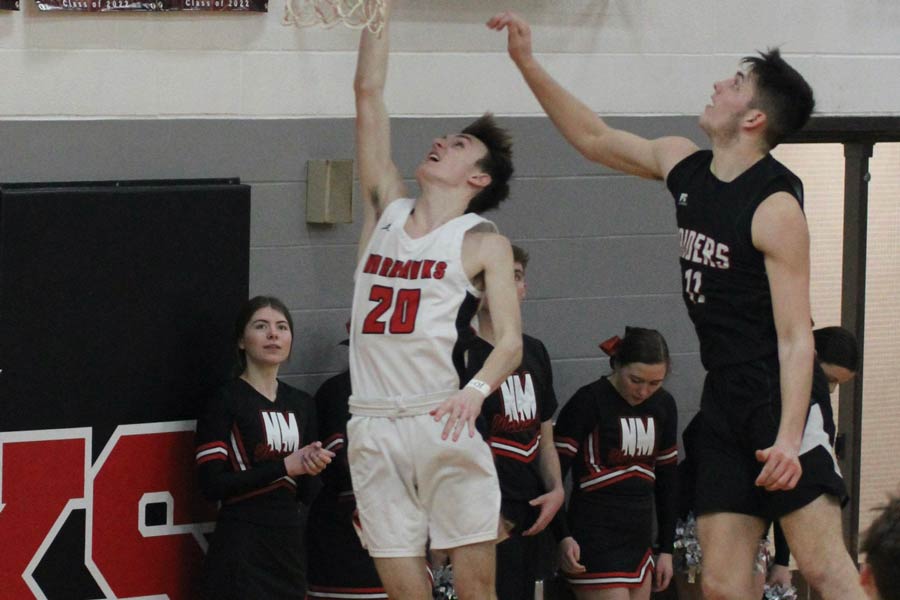 Three turnovers in the final four minutes by the Mount Ayr Raiders was enough for the North Mahaska Warhawks continue their season with a 66-60 Class 1A District 12 quarterfinal victory.

North Mahaska led for much of the game but no more than six points. As quickly as NM would make a run Mt. Ayr answered.

Each team had their go-to person. For the Raiders it was junior Jaixen Frost and North Mahaska answered with junior Nash Smith. Frost scored 23 points with five rebounds and two steals while Smith scored 27 points with six rebounds and three steals.

With 1 minute 42 seconds Frost ripped a 3-pointer to close the game to 60-57. Mt. Ayr was forced to foul to get NM to go to the free throw line. In the final seconds Smith hit 3-of-4 charity shots and on his miss with 13.5 seconds left, junior Ethan Huffman snagged the rebound to end the game. 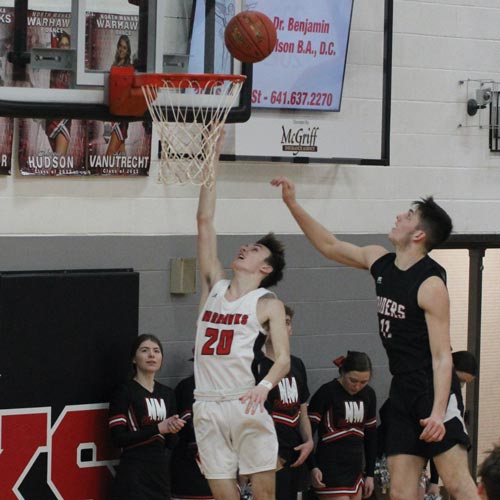 Ethan Huffman slips past Mount Ayr’s Jaixon Frost for a basket in the third quarter.

North Mahaska coach Seth Streebin said he would rather not face Frost again.

“Frost scares me,” said Streebin. “He is a great player, and he can do a lot of things.”

North Mahaska had to react quickly to Frost and his teammates.

“The kids were ready to respond, and they answered those runs they made,” said Streebin. “When we needed someone to step up, we got it.

“We had some moments when we were frustrated, and someone would pick it up.”

One of those was sophomore Nolan Andersen. He came off the bench in the fourth quarter and pulled down three key rebounds and with the help of Braden Steel turned into points or chances for free throws.

“I kind of get after Nolan because I know what he can do and you saw that out there tonight,” said Streebin. “He battled his butt off in there. I get after him at practice, and he came out and showed me he could do it.”

North Mahaska (18-5) will face Moravia (20-3) on Tuesday at 7 p.m. As of Thursday night ,the game is slated to be played at Central Decatur in Leon. The winner will advance to the substate final on Saturday, Feb. 26 in Chariton against the winner of the Martensdale-St. Mary’s (20-3)-Lynnville-Sully (17-6) game.