Girls’ Basketball Go On to State 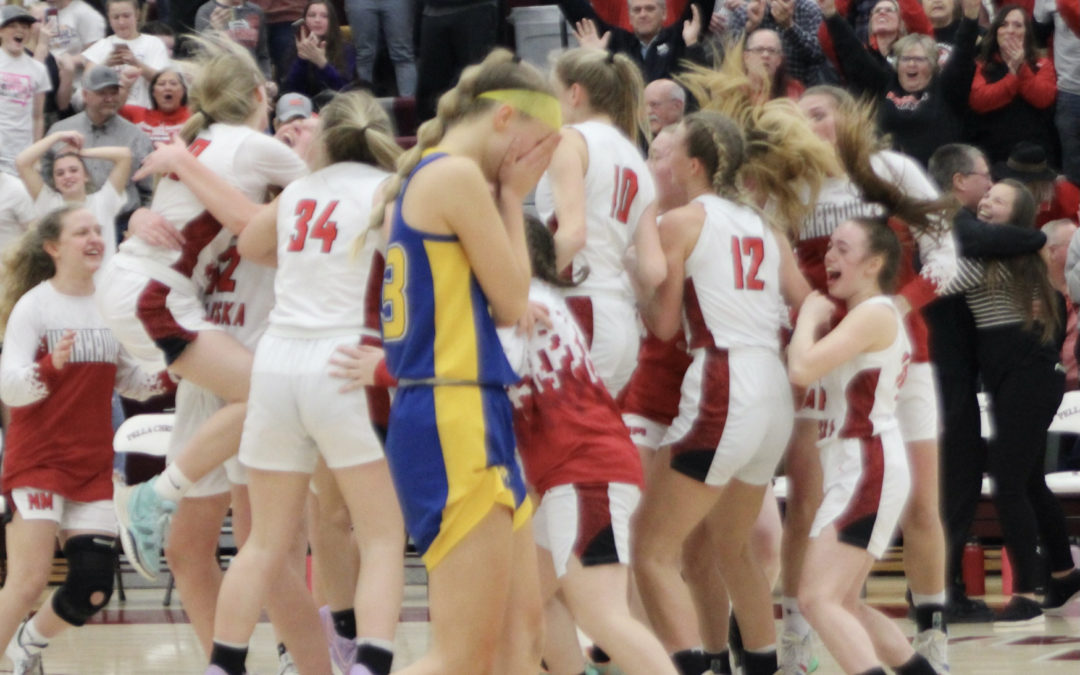 For 28 minutes it looked like No. 8 North Mahaska’s dream season was coming to an end as they faced No. 12 Martensdale-St. Marys in the regional final in Pella Wednesday. The Warhawks trailed MSM throughout half of the contest before eking out a 46-39 victory to advance to next week’s Class 1A state tournament.

North Mahaska (23-1) will face top-ranked Newell-Fonda (23-1) at 1:30 p.m. Wednesday, March 2 at Wells Fargo Arena in Des Moines.
Neither team was able to take a large lead. North Mahaska’s largest was the final seven-point edge while MSM held an 11-point advantage early in the third quarter.

“We turned the ball over a lot in the first half which is uncharacteristic of us,” said North Mahaska coach L.E. Moore. “We made adjustments and it worked better in the second half, except we kept missing those little ‘bunny’ shots.”

Foul trouble hurt the Warhawks in the first half as senior post player Layla Hargis had to sit with three fouls the final 1 minute 42 seconds of the first half.

“The turnovers and fouls hurt us in the first half, but Layla came in and just her presence causes teams to bring two people on her,” said Moore.
Hargis, who finished with a game-high 18 points hit two buckets and went 4-for-4 at the foul line in the fourth period. In the final four minutes the Warhawks went 8-for-10 at the charity stripe while limiting Martensdale-St. Marys to just four points.

“They were a pretty aggressive team and kind of pushed me around, but I got past that and worked my way through there,” said Hargis. “I was really nervous and wasn’t sure we could do it then we started playing Warhawk basketball and pulled through. I am so proud of this team.”

Rebounding was key with MSM collecting 11 in the first half and scoring 13 points off Warhawk turnovers. In the second half the roles were reversed, and NM scored 15 points, 11 of them in the fourth quarter, off 15 Blue Devil turnovers.

“We haven’t been in this position a lot so it was rocky, but I thought if we got to the line we could get it,” said senior Breanna Fogle. “Being down just makes us get in gear and work harder. I was just glad to see us relax at the line and do our thing.”

North Mahaska was clinging to a 42-39 lead with 51 seconds to play when Moore called a timeout.

“I remember coach said, ‘We are ahead, and they are down so just keep the pressure on,’” said Fogle.

“I told them this was their time and they needed to play sold defense,” said Moore. “I knew we had to take care of the basketball and foul us and see if we could win it at the line.”