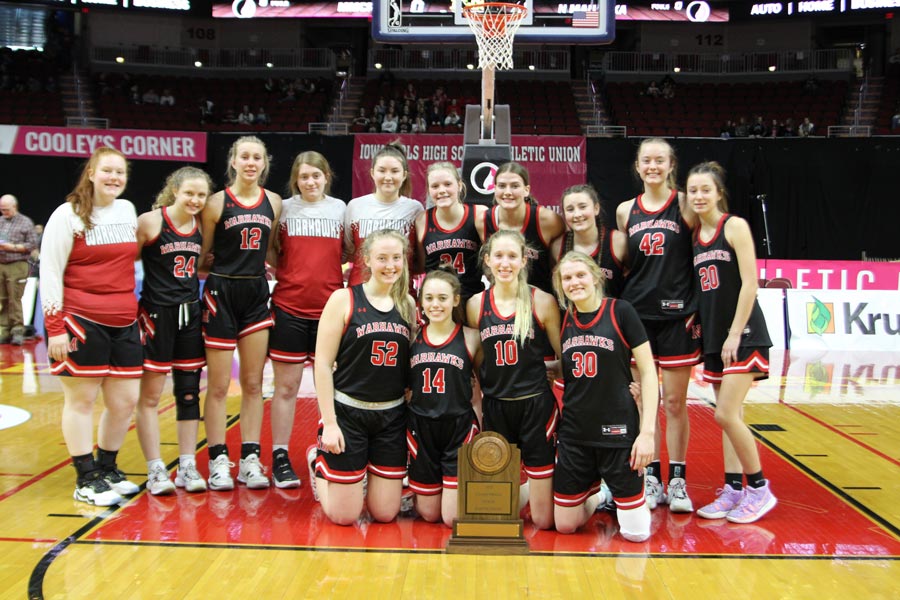 In every sports season there is always a final contest. North Mahaska’s dynamic season came to an end at Wells Fargo Arena Wednesday when top-ranked Newell-Fonda defeated the Warhawks 77-44. The Mustangs was able to do what 23 other Iowa schools could not do, and that was beat the Warhawks. North Mahaska’s other loss came in the first game of the season at Schuyler County, Mo.

The quarterfinal game was the final time that four seniors, Kaitlyn Van Donselaar, Breanna Fogle, Layla Hargis and Addie Schilling would don their Warhawk uniform. Twenty-three times this season North Mahaska was able to force teams to play their game. At state the roles were reversed.

“The defense was intense,” said Fogle. “They made us play in their atmosphere not ours. The tempo was run by them not by us.”

Coach L.E. Moore said the Mustangs’ defense created an environment that his team could not overcome.

“They sent five in and five out with a relentless defense,” said Moore. “There were momentum shifts but they made more plays. I really felt good at halftime that we had cut the lead to 15.”

Newell-Fonda opened the game with eight points before freshman Breckyn Schilling hit a layup with 4 minutes 53 seconds to play in the first quarter. The Warhawks cut the Mustangs’ lead to four a minute later then was outscored 16-2 in the period. NF scored 19 points off turnovers in the period.

North Mahaska opened the second quarter with two baskets off Mustang turnovers but could not cut into the lead and trailed 41-26 at half. North Mahaska had outscored the Mustangs 18-15 in the period. NF extended the lead with a 19-8 outpouring in the third and NM could not catch up.

“We were prepared, and I knew what to expect, but it was so overwhelming,” said Hargis. “It was so different than other teams and we couldn’t keep up.”

“They put a lot of pressure on us,” said Schilling. “We thought we were prepared, but they were so fast.”

North Mahaska turned the ball over three times as many as normal including 29 steals by the Mustangs. Their quickness and pursuit of the basketball was too much for the Warhawks and scored 46 points off 40 turnovers. North Mahaska collected 11 steals and 18 points off 23 Mustang turnovers.

Grewe’s effort will not show on the stat sheet. She scored four points but her presence going after rebounds and loose balls created opportunities for her teammates. She has played the reserve role most of the season except for five starts.

“I was a little intimidated at first,” said Grewe. “I thought we played hard and getting here my first year made it a successful season.”

Each team pulled down 31 rebounds with North Mahaska leading in defensive boards 18-17. Hargis led with eight and Breckyn Schilling with six. Fogle led in steals with four.

Team members refuse to allow the loss to define them.

“It’s been a fun experience and I am glad I have these memories with these seniors,” said Van Donselaar.

The game was also the cap of a season of magic for the Schilling sisters.

“It was always our dream to play basketball together at state,” said Breckyn. “It’s a dream come true. It’s just sad it had to end so soon.”

“We played basketball together all these years,” said Addie. “It’s probably the best feeling ever. Basketball was our thing.”

No doubt the team feels their season ended too soon, but they may take solace that only one team, and one team alone in Iowa able to beat them – Newell-Fonda, who may win a back-to-back state title.