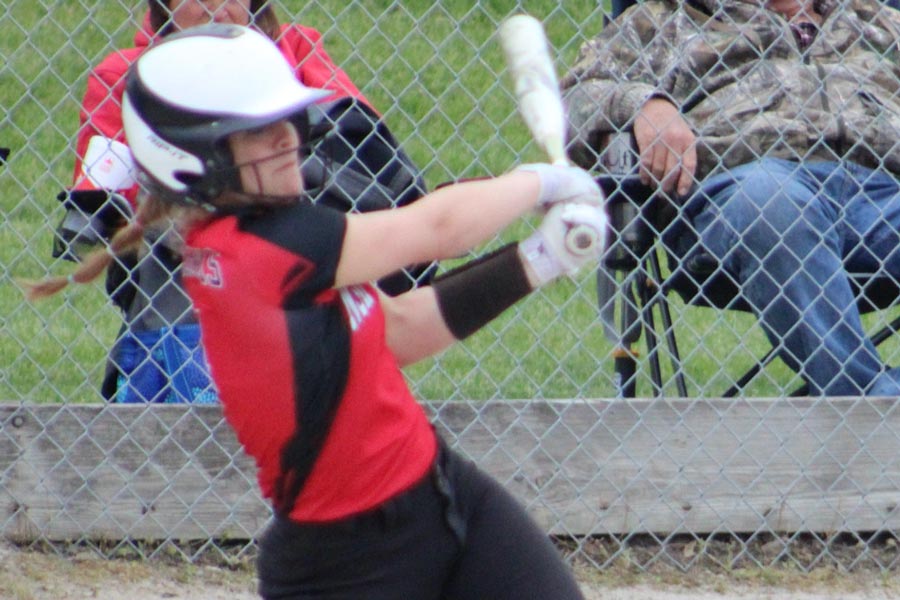 Two North Mahaska seniors made the most of their final season opener softball game Monday. Pitcher Morgan Hudson struck out 12 and shortstop Zoe Deucore bit a single, double and homerun to drive in three runs as the Warhawks defeated HLV 8-2 in New Sharon.

“We were a little slow getting started but they had a great night,” said first year head softball coach Erica Groom. “Morgan struggled at times and thought the strike zone was a bit stingy, but she delivered.”

Hudson struck out the first two batters she faced, gave up a lead-off homerun in the second, but did not yield another hit until the fifth inning.
North Mahaska took the lead in the first inning after Colby Sampson doubled and moved around on a pair of wild pitches. After HLV’s McKenzie Kempf homered to tie the game the Warhawks went back to work in the third. NM right fielder Jalayna Shipley singled and stole second and catcher Regan Grewe walked. Deucore hit a ground rule double to score Shipley, but they could not score Grewe.

In the fourth Hudson walked the first batter then struck out the side. In the bottom of the fourth NM again scored when Maddie Doonan singled then went to second on a wild throw by the third baseman. Cali Sampson hit into a fielder’s choice to score Doonan and give NM a 3-1 lead.

The fifth inning provided excitement for both sides. Two singles and a fielder’s choice allowed HLV to tack up another run and cut the lead to one. Deucore opened the bottom of the fifth with a homerun that bounced off a van beyond the centerfield fence. Despite an error, single and fielder’s choice the Warhawks could not extend the lead.

Hudson again retired the Warriors in order in the sixth and then NM took advantage of four errors to score four more. The big blow was a two-run single by Deucore.

“It was a great way for us to open the season,” said Groom. “I was a little nervous with this being my first softball game as head coach. We certainly have things to work on but we got the win. We’ll see on Wednesday when we play Colfax.”