NM Baseball Goes 1-2 on the Week 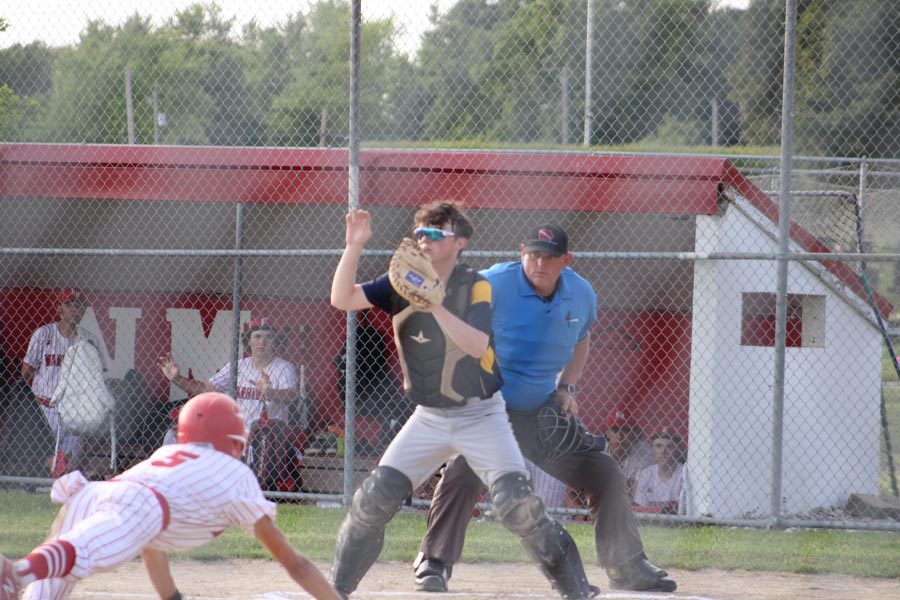 It has been a tough week for the North Mahaska Warhawk baseball team in more ways than one. They fell in a couple South Iowa Cedar League road games before ending the week with a 4-0 win over English Valleys.

Monday the Warhawks lost a 9-6 at Keota, but also lost the pitching services of Dodge Duke due to injury. Tuesday, they travelled to Colfax-Mingo and fell in a wild 20-10 affair.

“It’s tough,” said NM coach Kevin Kelderman. “We lost Dodge and Sam (Terpstra) cannot pitch due to the surgery. We keep playing though. We are off now until Monday.”

Wednesday, Nash Smith faced off with English Valleys’ Beau Flander as starting pitchers. Flander has been a relief pitcher but also has been pressed into action as a starter.

“This was Beau’s first start as a pitcher, he has been coming in relief,” said Jeremy Thomas, the English Valleys skipper. “That ground rule double would have been out at our place. Take away a couple line drives, and we would have had a different outcome.”

North Mahaska took a 1-0 lead in the second inning when Ben Johannes was hit by a pitch and went to second on a passed ball. An error allowed Johannes to move to third and Ben Boender drove him home with a single. A walk and back-to-back singles by Nate Sampson and Drake Hall allowed NM to put up two more runs.

In EV’s half of the fifth, Landon Montross ripped a single up the middle with two outs and Flander hammered a ball deep to center that hopped the fence and stranded Montross at third. A strikeout ended the Bears’ threat. EV managed just two more baserunners in the game. NM added a run in the bottom of the sixth.

The two teams will meet again on June 25 at Duane Banks Stadium on the campus of the University of Iowa. The JV-varsity twinbill is scheduled for 6 p.m.

Dodge Duke went 3 2/3 innings before leaving with a shoulder injury. He had given up four runs on three hits, seven walks and five strikeouts. Nolan Andersen took the loss allowing five runs on four hits, three walks and three strikeouts.

Caden Clarahan started the game working four innings. He allowed six runs, five earned on seven hits, two walks and a hit batsman. He struck out six. Aiden McGuire pitched in relief and picked up the victory. He threw three innings walking one batter, striking out three and yielding a hit.

Through the first inning and a half North Mahaska was in control scoring four in the first and another in the top of the second for a 5-0 lead. C-M answered with four of their own only to see NM tally three for an 8-4 lead entering the bottom of the third.

From there it was all CM. The Tigerhawks scored four in the bottom of the third, five in the fourth and seven in the sixth. In the final three innings North Mahaska managed just two single run frames.

North Mahaska used five different pitchers who combined for 20 runs, 13 earned on 14 hits and 17 walks. They struck out six batters.

The Bracewell brothers accounted for seven RBIs for the Tigerhawks. Cole hit three singles and a homerun to drive in three while Cael rapped three singles with three RBIs.