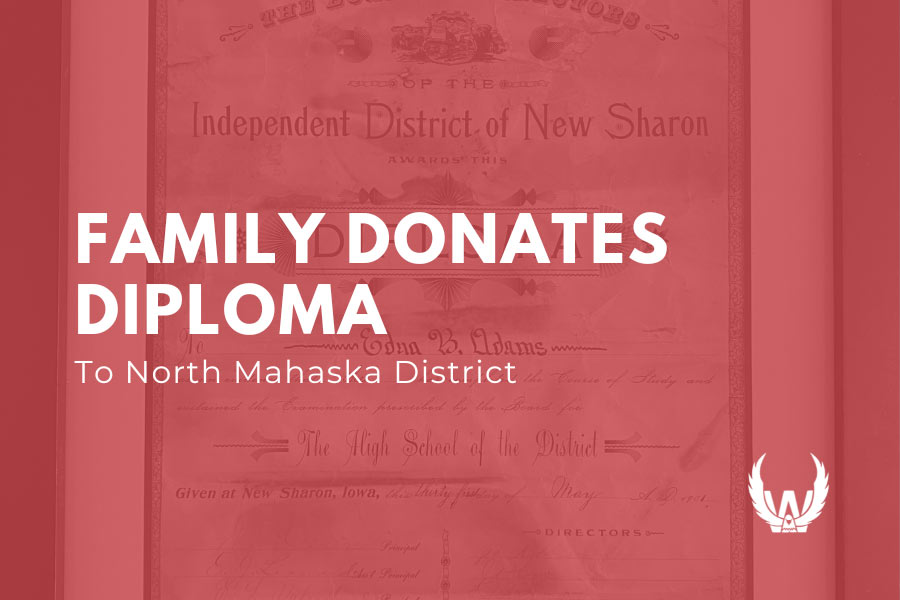 A special piece of family history has found a new home in the North Mahaska Community School District.

The family of Rodney, Deb and Jerry Myers donated their great-great-great-aunt’s 121-year-old high school diploma to the district. Edna B. Adams graduated from North Mahaska High School in 1901 at the age of 14, along with nine other classmates.

The diploma is in great condition for its age and was found in the personal Bible of Ruth Ann Slycord Verploegh, the Myers siblings’ mother and Adams’ great-great-niece.

“We found the diploma in my mother’s bible. That’s the reason it’s in such good shape,” Jerry says. “She must have used it as a marker to keep her place.”

Jerry says his mother must have been particularly close with Adams. He and his siblings came across the Bible after Verploegh died in 2017.

“Evidently my mom and her were close. There was obviously something there, which I wasn’t aware of growing up as a child,” Jerry says. 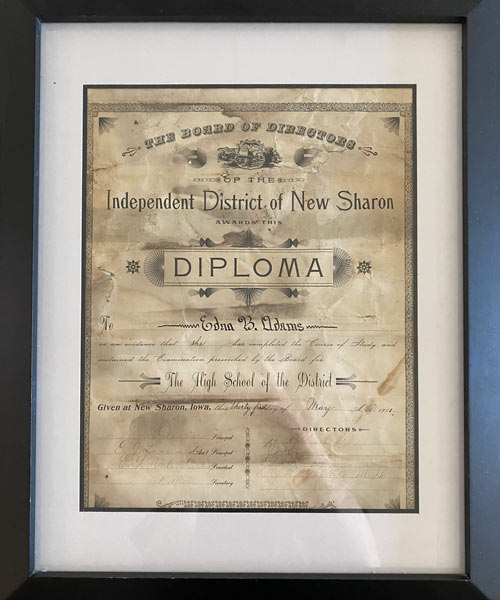 The Myers’ siblings chose to donate Adams’ diploma to the school because of its historical significance. Much has changed in 121 years — especially the age of high school graduates.

“This just shows how long the school has been around,” Jerry says. “And so now that the diploma is with them, it will be around for so many more years than what it might be with our family.”

Angela Livezey, superintendent of the North Mahaska Community School District, says they are still in the planning process to decide how they will display the diploma.

“The 1901 diploma was a really neat contribution to North Mahaska. It is exciting to reflect on the history of North Mahaska and all of the students that have [been] impacted along the way,” she says. “We are in collaboration working to decide how best to display our historical artifacts so they can be appreciated by all those who walk through our doors.”

Jerry’s grandchildren, Gage and Cheyenne Shaw, both go to school in the district.

“Gage is talking about staying around the area to farm and so forth, so it’s possible his kids could go to North Mahaska and see it too,” Jerry says.

Adams’ diploma is a special piece of family history that will be on display for years to come.

“I think my mom would look at this and think that’s one of the best choices I’ve ever made,” Jerry says. “I think she would be overwhelmed with it.”