North Mahaska utilized 20 service aces and healthy dose of determination Monday to defeat Iowa Valley and advance to the old Bracket of the South Iowa Cedar League tournament. They will face Belle Plaine, Sigourney or HLV in a semifinal match Thursday at 5 p.m. Warhawks won 25-18, 25-8, 25-18.

Monday was emotional day for the team as school superintendent Angela Livezey and team member Ally Livezey mourned the death of father and grandfather, David Bair. The teams sported lavender ribbons and the NM girls were introduced with caps in honor of Bair, who collected many hats.

“It was definitely emotional not having Ally here,” said coach Erica Groom. “I am proud of the girls and the effort they put forth tonight.”

North Mahaska was a bit slow coming out of the gates with the team swapping points on miscues. Senior Libby Groom served up four points including an ace to move the first set to 21-16. Freshman Abby Van Weelden, who would finish the night with eight kills, drove down a hard spike for the win. 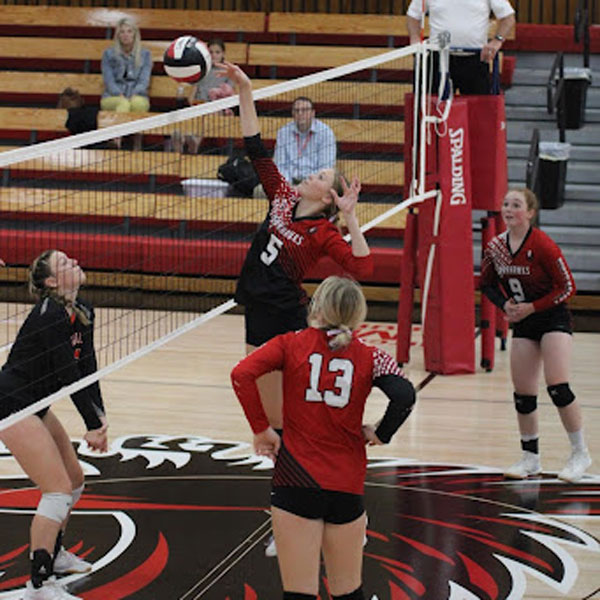 Abby Van Weelden picks up a kill against Iowa Valley Monday night in pool play of the South Iowa Cedar League volleyball tournament. North Mahaska advanced to the Gold Bracket championship and will play Thursday at a site to be announced.

Set two found the Warhawks in control early. They would earn five aces in the set including three by senior Jalyana Shipley.

Three serves into the net by Iowa Valley also aided the cause.

Set three found the Warhawks playing uphill as Iowa Valley jumped out to a 5-0 lead. They held an 11-10 lead when Groom stepped up and with the help of Breckyn Schilling tip took the lead 13-12. Iowa Valley regained the lead then sophomore Sydney Andersen hit four aces to end the match.

“It is good to get the win in something like this,” said coach Groom. “We didn’t hit very well in the first and third matches and we have some things to work on. We had some good blocks at the net and the aces helped.”

Schilling recorded seven kills and three blocks. Senior Caitlyn Sanders was credited with 14 assists and sophomore Libby Hargis had five. Shipley led the team in digs with 12, Regan Grewe had 10, Schilling with six and Andersen with five.

Andersen led in service aces with six followed by Groom with five, Grewe with four and Shipley with three.