North Mahaska scored 15 aces and the visiting Mormon Trail Saints misplayed nine service balls as NM advanced to the quarterfinals of the Class 1A Region 8 volleyball tournament. North Mahaska won with scores of 27-25, 25-21, 25-18.

Sophomore Regan Grewe was key to the win recording half of the team’s aces. Trailing 2-1 in the first set Grew served five consecutive aces for a 7-3 lead. Mormon Trail would not go away. They were able to come back to close the gap to 14-12. NM senior Jalayna Shipley scored a pair of aces to seemingly put the Warhawks in control. The Saints tied the set at

25-25 and a sideout then a misplay gave North Mahaska the victory.

“We got in front then we relaxed,” said NM coach Erica Groom. “Regan had a good night and that helped us. She has been working to find those corner areas.” 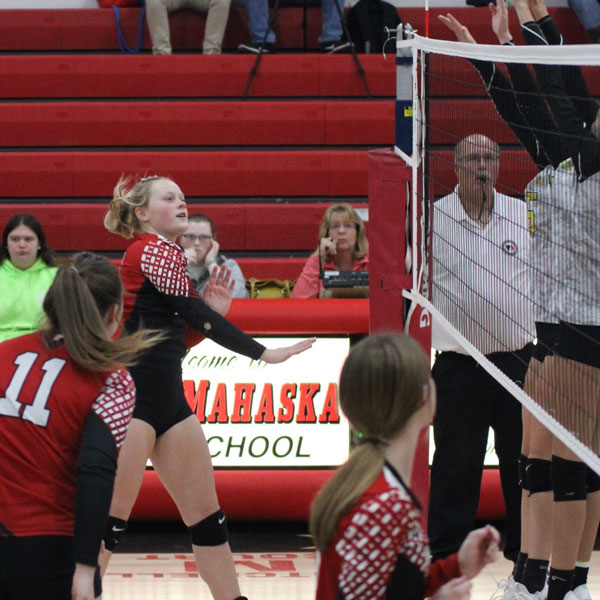 North Mahaska used six aces in set two but could not pull away from the Saints. Grewe added two more aces and combined with aces from Libby Groom, Sydney Andersen and

Grewe broke a 1-1 tie serving to a 7-2 lead and adding another ace to open the final set. The Saints cut the lead to four but could not get any closer.

“It was kind of the luck of the serve I guess,” said Grewe. “We know that if we work as a team, we can be successful.”

Due to injury and some illness Groom has had to scramble her lineup.

“They are adjusting to having different people in there,” said Groom. “We are still trying to find the combinations that work in certain situations.

“I told them in the locker room that if we play together, we can win Wednesday night. They (WACO) are a good team.”