In one of the toughest environments to play in, North Mahaska pulled off a clean sweep in their basketball doubleheader with rival Montezuma. The girls topped the No. 10 Bravettes 50-44 while the boys topped Monte 76-73.

Both games were tightly contested with free throws making the difference.

In the girls’ contest, North Mahaska (5-1, 3-0) jumped out to an eight point lead before Ellen Cook hit the first of her three treys. Montezuma (4-1, 3-1) would hit six 3-pointers in the contest. North Mahaska’s Breckyn Schilling hit for 15 first-half points and Monte combined for four treys to lead 22-19 at halftime.

“I got after them at halftime,” said North Mahaska coach L.E. Moore. “We weren’t going after the basketball and was turning the ball over.”

Cook drilled another long ball to give Monte its biggest lead of the night at six. NM cut it to two in the third only to see the Bravettes jump back up six. Baskets by

Regan Grewe, Aly Steil, Schilling and a trey by Sam Van Weelden put the Warhawks up 35-33 entering the final period. Monte’s Mia Boulton and Van Weelden traded long balls and with the scored tied at 40, Sydney Andersen hit two consecutive baskets underneath to gain a 44-40 lead. 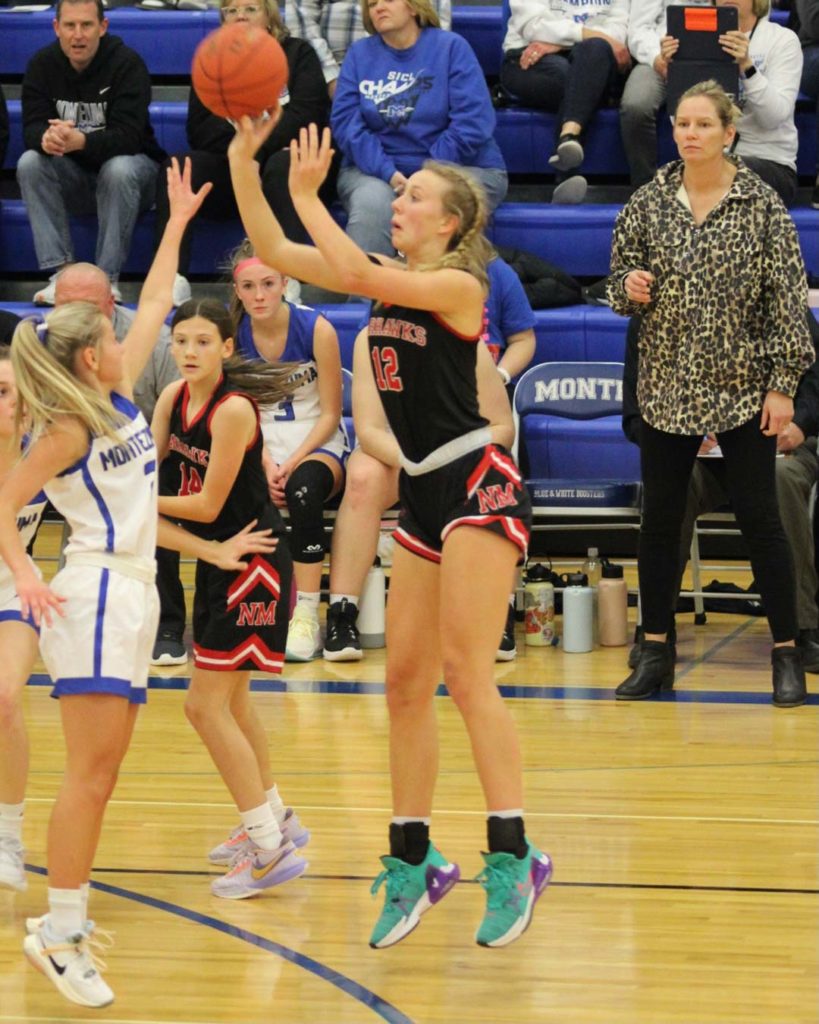 North Mahaska’s Breckyn Schilling makes a 3-point shot over Montezuma’s Ellen Cook in the first half Tuesday. Schilling scored 25 points to lead the Warhawks past No. 10 Montezuma 50-44

Monte post player Shirissa Wetering was the only Bravette to score in the final 1 minute 18 seconds. Meanwhile, North Mahaska took shots at the foul line dropping 6-of-7 to upset the Bravettes. North Mahaska went 13-of-18 from the line including 9-for-12 in the second half. Monte went to the line eight times with six makes.

“Our free throw shooting has gotten better,” said Moore. “Their threes scared me. She (Boulton) can shoot from so far out, how do you cover her? I thought we did a good job on the boards. Sam’s threes came at just the right time.”

In the boys’ contest, Montezuma held just one lead in the game, a 26-25 edge in the second quarter. However, the Braves were deadly from the 3-point arc dropping in 13 of the shots. North Mahaska used a 9-for-10 performance at the free throw line including three and-1 opportunities to lead 39-36 at halftime. 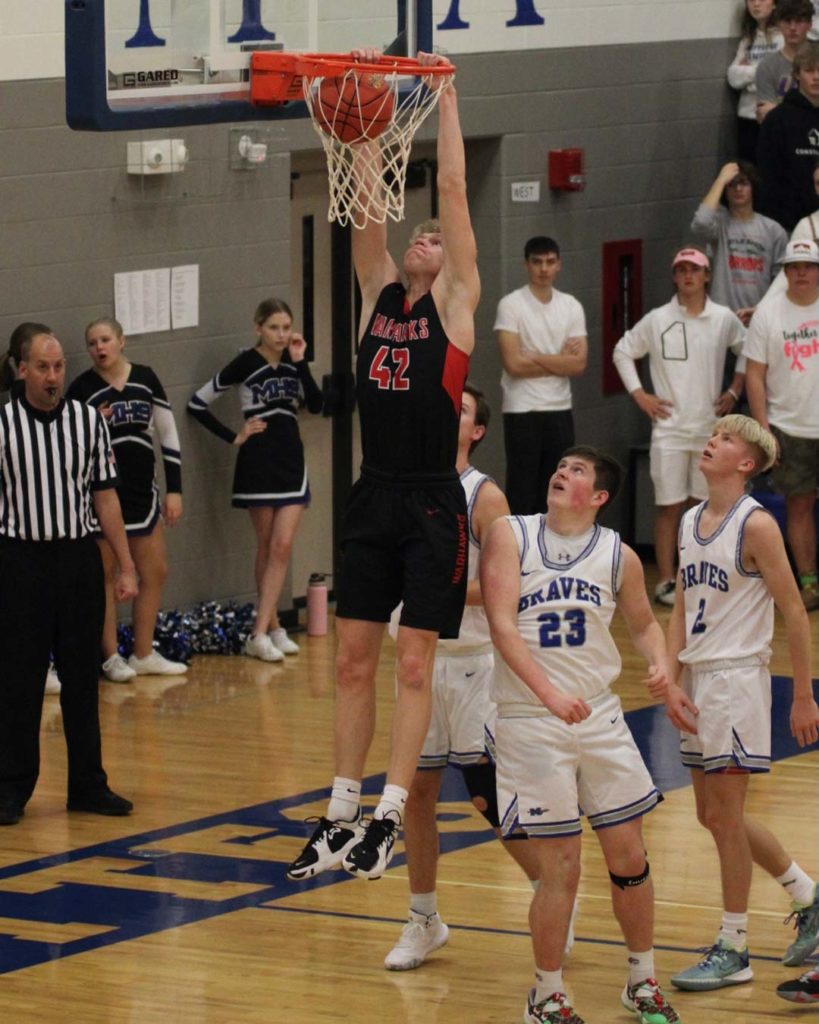 Nash Smith flies past Montezuma’s Max Anderson (23) and other Brave defenders. Smith scored 15 points and pulled down 10 rebounds and hit four free throws in the last two minutes to lift North Mahaska to a 76-73 win.

Gavin Strong’s trey opened the second half and tied the game at 39. NM went on a nine-point run to extend the lead. Another scoring spurt allowed the Warhawks to build a 16-point advantage, 63-47. As soon as the Warhawks would build a lead Monte would answer.

Braden Steel hit an inside basket with 1:53 to play as NM gained a 10-point lead. Strong hit two free throws and Masin Shearer added a trey to cut the lead in half.

Brady Boulton hit a basket and Garrett Watts was fouled on a 3-point attempt. He hit two of the shots then North Mahaska’s Nash Smith hit a pair of foul shots with 7.8 seconds left and Monte could not get a shot to fall.

“Our free throws were the difference,” said NM coach Seth Streebin. “They are just deadly from 3-point range it is hard to defend them. We couldn’t stop him (Shearer). He dropped 31 on us.”

North Mahaska will travel to Thornburg Friday to take on Tri-County and hosts English Valleys on Tuesday. The boys will host Gladbrook-Reinbeck on Thursday, Dec. 22 to close out the pre-Christmas season.