North Mahaska’s No. 12 basketball team had a slow start in a physical game against South Iowa Cedar League foe Sigourney. The two teams shot 35 free throws in the contest. North Mahaska broke away from a 6-3 first quarter lead to post a 48-31 win.

The two teams battled back and forth suffering missed shots and fouls. NM had just two field goals in the first quarter while Sigourney scored only free throws and did not score after the 6 minute mark of the quarter. North Mahaska held the Savages to only one field goal in the third quarter.

Breckyn Schilling got things rolling for the Warhawks scoring a triple and two baskets in just over a minute and a half. Leading 19-9 entering the final 1:45, North Mahaska hit three 3-pointers to take solid control 28-9. 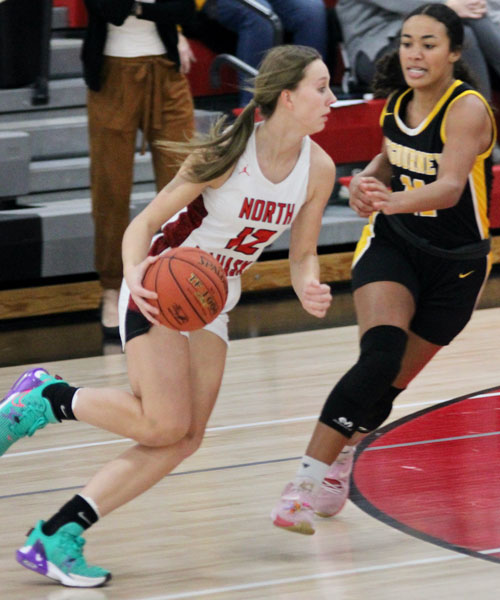 Breckyn Schilling of No. 12 North Mahaska makes a drive against Sigourney’s Amiya Smallwood in the first half. Schilling scored 22 points and grabbed six rebounds to help the Warhawks to a 48-31 victory.

Sigourney (8-7, 5-5) shot just 18 percent from the field hitting eight baskets, three of those from beyond the arc. They were 12-of-20 from the foul line while North Mahaska shot 27 percent from the floor with five triples and went 11-for-15 at the line.

“This was a very physical game, but we needed one like this,” said North Mahaska coach L.E. Moore. “We will have another one like this Monday when we play Chariton.”

Josephine Moore led Sigourney with 14 points and 11 rebounds. Carly Goodwin had 12 points.
North Mahaska (13-1, 10-0) will go to Chariton on Monday and will have Tuesday off as Colfax-Mingo is not fielding a girls’ team. HLV will host North Mahaska Friday.