Friday was a big night for the North Mahaska boys’ basketball team as they had a player with a double-double, triple-double and a record-setting performance by another to post a 69-42 victory over Sigourney. The Warhawks outrebounded Sigourney 50-21 and held them scoreless in the third period. 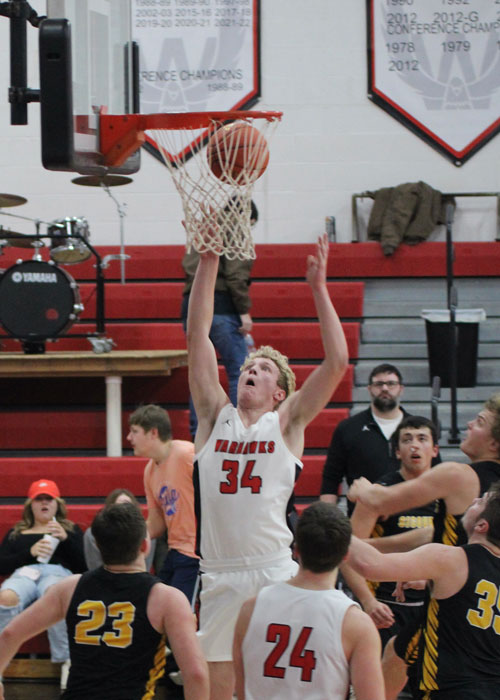 North Mahaska’s goes up for two following an offensive rebound. The senior cored 13 points, grabbed18 rebounds and doled out 10 assists to help the Warhawks to a 69-42 win over Sigourney.

Harmon, who set the school record for steals at 163 in the first half, led the barrage with 17 points, seven steals, six assists and four rebounds. Braden Steel finished with a triple scoring 13 points, 18 rebounds and 10 assists while Nash Smith had 13 points and 11 boards. Nolan Andersen chipped in 16 points with six rebounds.

North Mahaska shot 46 percent from the floor hitting 31-of-68. Neither team shot well from the foul line. NM was 4-for-13 while Sigourney went 4-of-12. 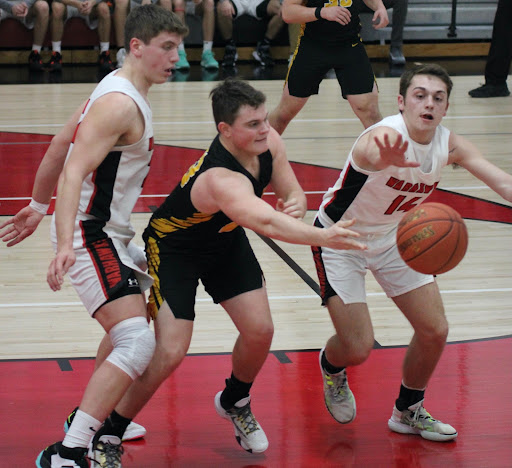 Lane Harmon gains a steal from Sigourney’s Clay Morse, one of seven steals Friday night. Harmon set a career record of 163 in the 69-42 victory.

Sigourney was led in scoring by Karson Weber with 12, Kale Clarahan had nine points and six rebounds and Clay Morse added eight points.