North Mahaska moved a game closer to vying for the conference basketball title with an 89-34 thumping of Colfax-Mingo Tuesday. North Mahaska, currently second in the South Iowa Cedar League to undefeated Lynnville-Sully, had two players score 25 or more points.

The story of the night was senior Lane Harmon, who broke the school’s steals record last week broke the 1,000 point mark with 2 minutes to play in the third quarter. He finished the night with 25 points and added four more steals.

Teammate Nash Smith ripped in 26 points while Braden Smith had a double-double with 12 points and 12 rebounds.
North Mahaska (13-2, 10-1) jumped out to a 25-8 first quarter lead with Harmon putting ion 12 of those. The Warhawks hit nine 3-pointers in the game and left no doubts as to who would win the game with a 47-21 halftime lead over the winless Tigerhawks.

It was North Mahaska’s transitional game that provided most of the team’s points. Both Harmon and Smith were beneficiaries of the breakaway game.

“That’s our game,” said Harmon. “I reached this because of our transition game. I am thankful for my teammates because I could not have done this without them.”
NM coach Seth Streebin agreed.

“We do a really good job this year,” said Streebin. “They do a good job of finding each other and sharing the basketball.

“It’s pretty cool when you see players come in and play hard for four years. We are seeing some great things from them.” 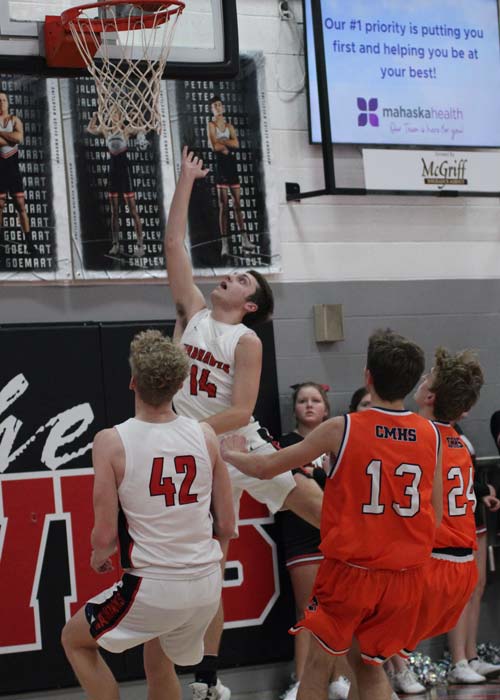 Lane Harmon (14) pops in a basket in the second half as he topped 1,000 points for his career in an 89-34 win over Colfax-Mingo. Harmon scored 25 and teammate Nash Smith (42) hit for 26 to keep the Warhawks in the hunt for the South Iowa Cedar League crown.

Defensively Streebin said they were watching Colfax-Mingo’s Cael Bracewell and Harrison Rhone. The duo had 26 of the team’s 34 points in the 70-34 loss in November. Tuesday they each had five. Jared Lewis led the Tigerhawks with 11 points.

“Keep in mind that Bracewell and 13 (Rhone) are good players,” said Streebin. “We knew we had to know where they were on the floor. Now we have to keep taking care of business.”

Colfax-Mingo will be glad to not have to see the Warhawks again this season. Smith notched his 1,000th point of his career against them in November.

Adding to the scoring for North Mahaska was Ethan Huffman with nine and Asher DeBoef with seven.

North Mahaska travels to HLV Friday, hosts BGM on Tuesday, Jan. 24 then goes to Lynnville-Sully on Jan. 27. An NM win could result in a tie for the conference title if the Warhawks defeat Montezuma on Jan. 31.