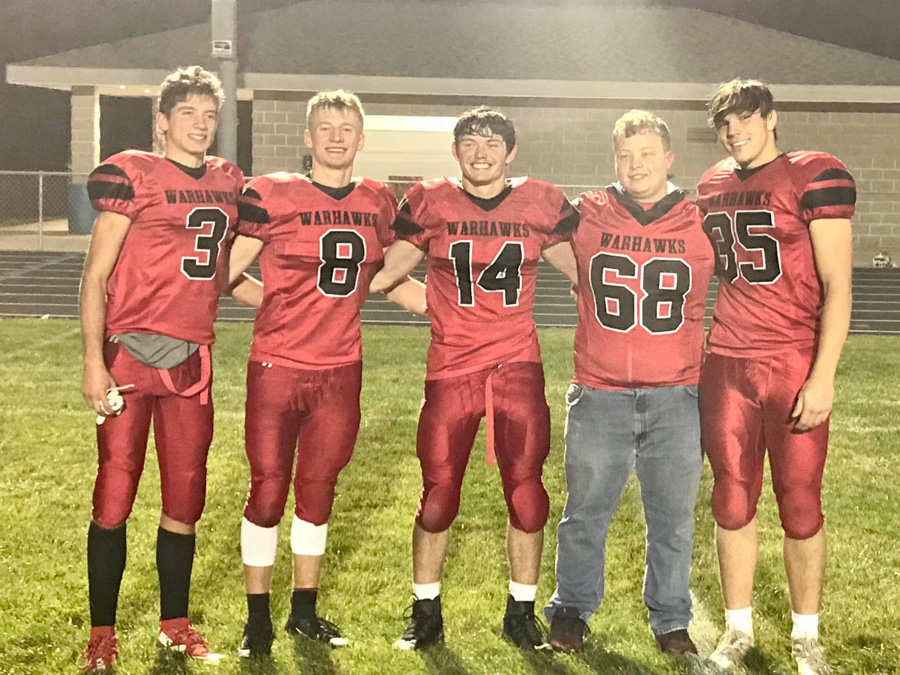 North Mahaska senior Dylan Klinker, with the aid of his teammates, had a classic night on the gridiron Friday capturing a 30-20 homecoming win over BCLUW. Klinker along with teammates Blake Readshaw, Matthew Goemaat, Dominick DeBoef and Isaiah Ashman, were recognized prior to the start of the homecoming game. Klinker was crowned king on Thursday and dominated the Comets of BCLUW in accumulating 225 all-purpose yards and scored three touchdowns as North Mahaska picked up their second win of the season.

BCLUW drew first blood when NM could not move the ball in the first quarter. With 2 minutes 17 seconds left in the first quarter, Comet quarterback Jesse Moore faked a shovel pass then rolled in from 47 yards out. The Warhawks blocked the point after attempt. In the second period Klinker hauled in an aerial from Sam Terpstra and with the extra point took the lead 7-6. Late in the half Klinker again scored on a Terpstra pass on a fourth down play to put the Warhawks ahead 14-6.
Brayden Steel recorded a sack of Moore for 11 yards, but the BCLUW quarterback steered the Comets down the field and scored with 8 seconds to play, but NM led 14-13 at half.

North Mahaska could not do anything with the opening drive of the second half. BCLUW was able to score to regain the lead 20-14. Penalties thwarted drives, but the biggest play came on a play when the ball sailed out of the back of the BCLUW endzone for a safety.
The final frame opened with Chase Grandia recovering a fumble to set up a six-yard plunge by Terpstra to give NM a lead they would relinquish. Klinker would score again with 2:33 to play to seal the game and allow his teammates to ring the victory bell.
North Mahaska (2-4, 1-3) had its best offensive night of the season. Terpstra passed for 107 yards and the Warhawks rushed for 170 yards, 123 of those by Klinker on 18 carries. Terpstra rushed 14 times for 24 yards and Drayton DeBoef had 21 yards on six carries.
Defensively, Klinker was credited with 11.5 tackles including seven solo/ Readshaw had five with four solo. Grandia had the fumble recovery and Steel had two sacks.

North Mahaska is scheduled to close out the 2020 regular season Friday night at Lynnville-Sully. They will open the playoffs on Friday, Oct. 16 against a yet to be determined opponent.