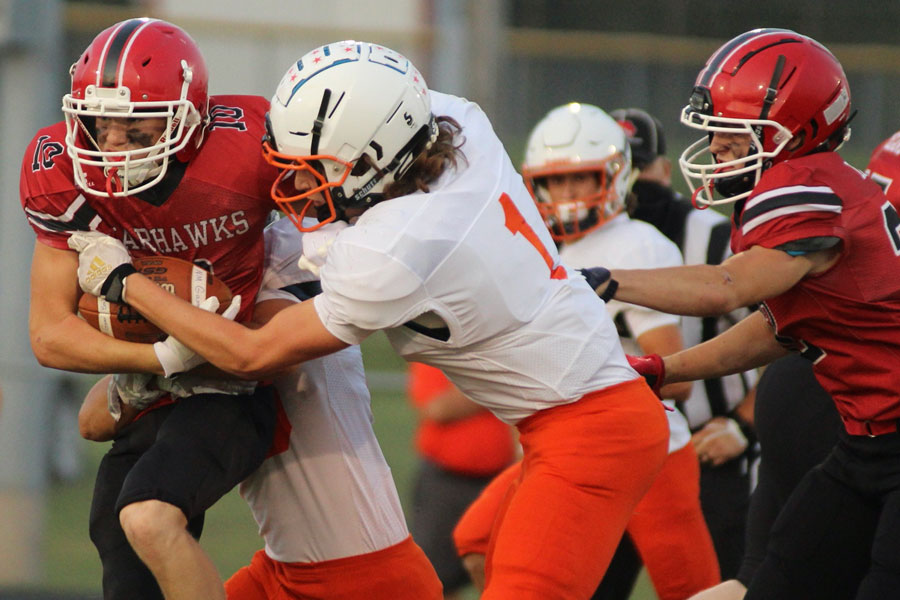 Everyone in the stands and on the field knew one team was going to pick up its first win of the season when the Colfax-Mingo Tigerhawks made their way to Steve Ehret Field at North Mahaska Friday. The game resembled an old west shootout with each team taking a lead and dealing blows. When the final gun sounded it was the Tigerhawks who had emerged victorious 35-32.

North Mahaska (0-3) and Colfax-Mingo (1-2) combined for an unofficial 700-plus yards on the ground and through the air. Senior quarterback Sam Terpstra was 23-for-107 yards through the air with two touchdowns and two interceptions.

It was Terpstra and Ethan Huffman hooking up for a score in the first quarter. NM and the Tigerhawks traded turnovers on their first possessions of the game. C-M’s Nate Jones picked off Terpstra then on the very next play, sophomore Gage Vande Voort stripped a Tigerhawk runner and recovered to give NM the ball at the North Mahaska 30-yard line. Huffman hauled in Terpstra’s aerial and outran the defense to the end zone breaking three tackles along the way. Luke Nunnikhoven added the extra point.

Colfax-Mingo evened the score on a 12-yard score with just under three minutes to play in the quarter. On the second play of the second period, NM regained the lead when senior Jaydyn Steil broke free for a 16-yard score. NM missed the point after but led 13-7. 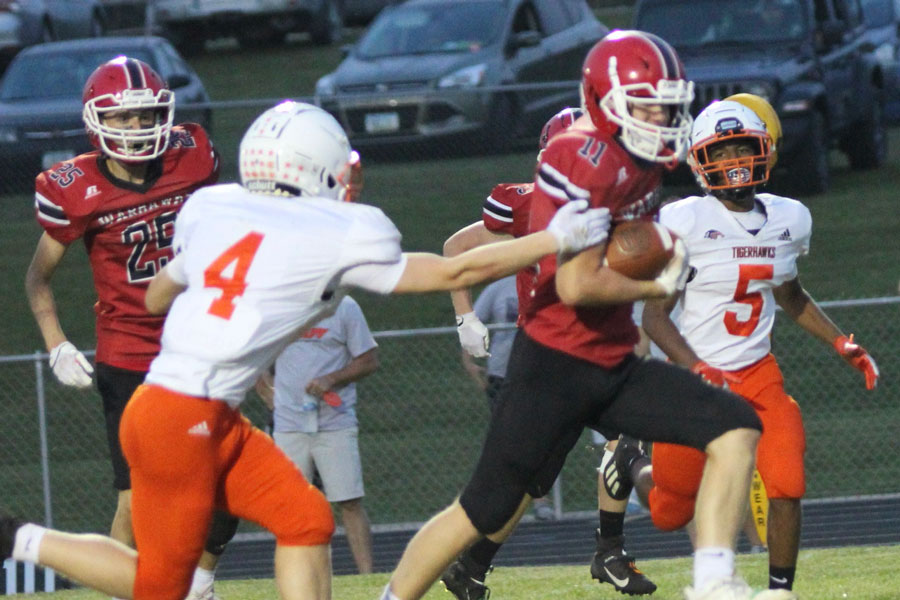 Colfax-Mingo engineered a nine-play 69-yard drive to take the lead. They were aided by a personal foul and offsides call when the Tigerhawks were at the NM 10. Curtis Horras popped in from the 2-yard line for the score to take the lead.

CM kicked the ball out of bounds on the kickoff and the Warhawks took over at the 35-yard line. Smith and Terpstra again hooked up for three passes and on the third from 10 yards out, Smith was ruled to have caught the ball. CM argued he did not complete the catch but after the officials conferred, Smith was awarded the score and NM tried a 2-point conversion but was stopped short.

“It was the littlest things that hurt,” said a disappointed NM coach Phil Griffin. “I feel so sorry for these kids. They played hard and worked. We made some good plays on defense and our offensive pass blocking was outstanding.”

North Mahaska’s Paul DeJong battles for yardage against Colfax-Mingo. DeJong rushed 17 times for 73 yards and scored a touchdown in a 35-32 loss.

Griffin was also pleased with the running game, which topped the 100-yard mark for the first time this season. The Warhawks rushed 23 times for 107 yards and scored three times.

Defensively for the Warhawks, in addition to his fumble recovery Vande Voort was also credited with a quarterback sack.

Both teams struggled with penalties. North Mahaska was flagged 10 times for 44 yards and CM had 100 yards on 10 flags.

The second half was just as much a battle as the first. Colfax-Mingo took the opening drive and went 65 yards in eight plays to regain the lead 21-19. Three Tigerhawk penalties aided the North Mahaska drive and Paul DeJong drove in from the 5-yard line, but the kick failed. NM held the advantage 25-21 going into the final frame.

CM took the lead for good early in the fourth quarter on a 32-yard pass and kick. NM scored with 1:04 left in the game and made the kick but could not get the onside kick.

North Mahaska prepares to play No. 7 Ogden next week for homecoming.