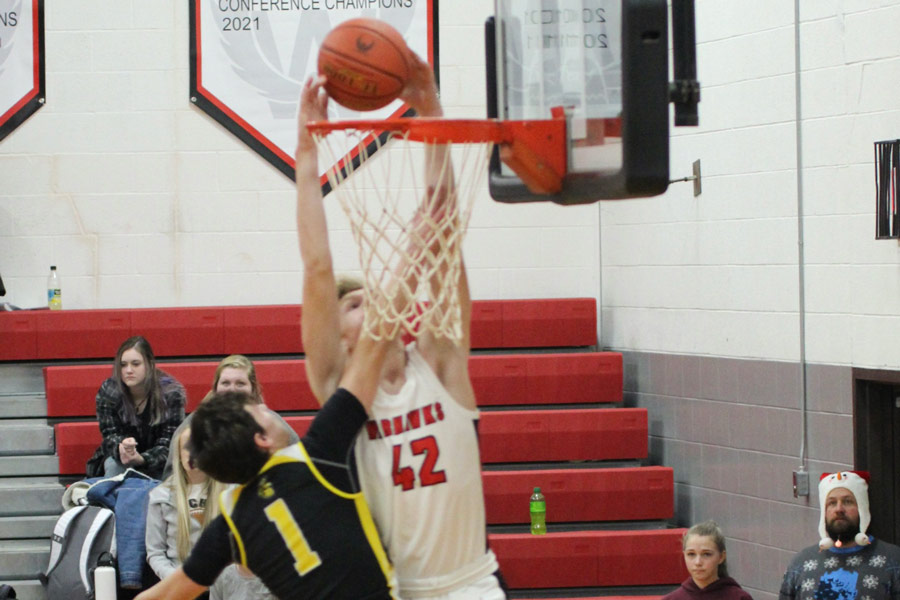 North Mahaska’s juggernaut basketball team kept moving forward scoring a 101-29 win over the boys from Tri-County. The contest saw 3-point shots taken from all over the court.

North Mahaska, 7-0, jumped out early scoring 34 first quarter points while limiting the Trojans to a field goal by Scott Rivet. The senior popped a jumper with 45 seconds left in the period. It was not enough to match North Mahaska’s Nash Smith who collected 19 of his game-high 24 points in the quarter.

Tri-County was unable to handle the Warhawks’ size and scoring ability. North Mahaska had six players in double figures. Sean Knockel knocked down 17 points and Braden Steel added 13 as did Ethan Huffman. Nolan Andersen came off the bench to score a double-double with 12 points and 12 rebounds. Nate Sampson finished with eight points. 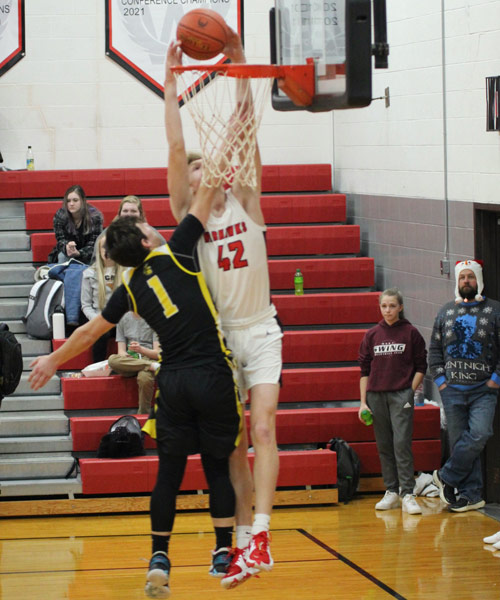 North Mahaska’s Nash Smith drops a dunk over the head of Tri-County’s Ely Molyneux in the first quarter. North Mahaska won the contest 101-29.

“It was a tough game to coach because they were putting up 3-pointers from all over the court,” said North Mahaska coach Seth Streebin. “I don’t know what to say. It is hard to just tell your kids to hold the ball out there. They (Tri-County) were not running a traditional offense.”

Streebin was pleased with the intensity he saw with his reserve players. They were playing like it was the first quarter, not the fourth.

North Mahaska travels to Gladbrook-Reinbeck Monday to take on another team that is undefeated. Tuesday the Warhawks will close out the pre-Christmas season at English Valleys.