North Mahaska coach L.E. Moore was concerned about how his No. 8 ranked Warhawks would do against an aggressive Sigourney team Thursday night. The teams were meeting in a makeup game and the Warhawks were missing their point guard and was coming off an emotional win over Montezuma on Tuesday.

“We’ll see what they look like when the game starts,” said Moore prior to the start of the game. “We will have a different look without Breckyn (Schilling).”

Schilling, who had scored 12 points before going out of the game with an injury in the third period, was on the bench and could only watch as her team scored the first five points. The game was plagued with fouls (42 total) and 51 free throws. North

Mahaska scored 27 points at the charity line while Sigourney scored 10.

Sigourney coach Zack Tremmel knew the Warhawks were going to take the ball inside to Layla Hargis but also knew not to leave the outside open. Hargis hit for 25 points inside and Kaitlyn VanDonselaar, on the strength of six 3-pointers added 20.

“We knew what they wanted to do, and I told them not to leave her open, but we could not do it,” said Tremmel. “They are good going inside and they have the ability to hit from the outside. Once she got hot it was tough.

“I thought we played good defense at times, but they have a lot of talent, and they are strong on defense. I was proud of our defense.” 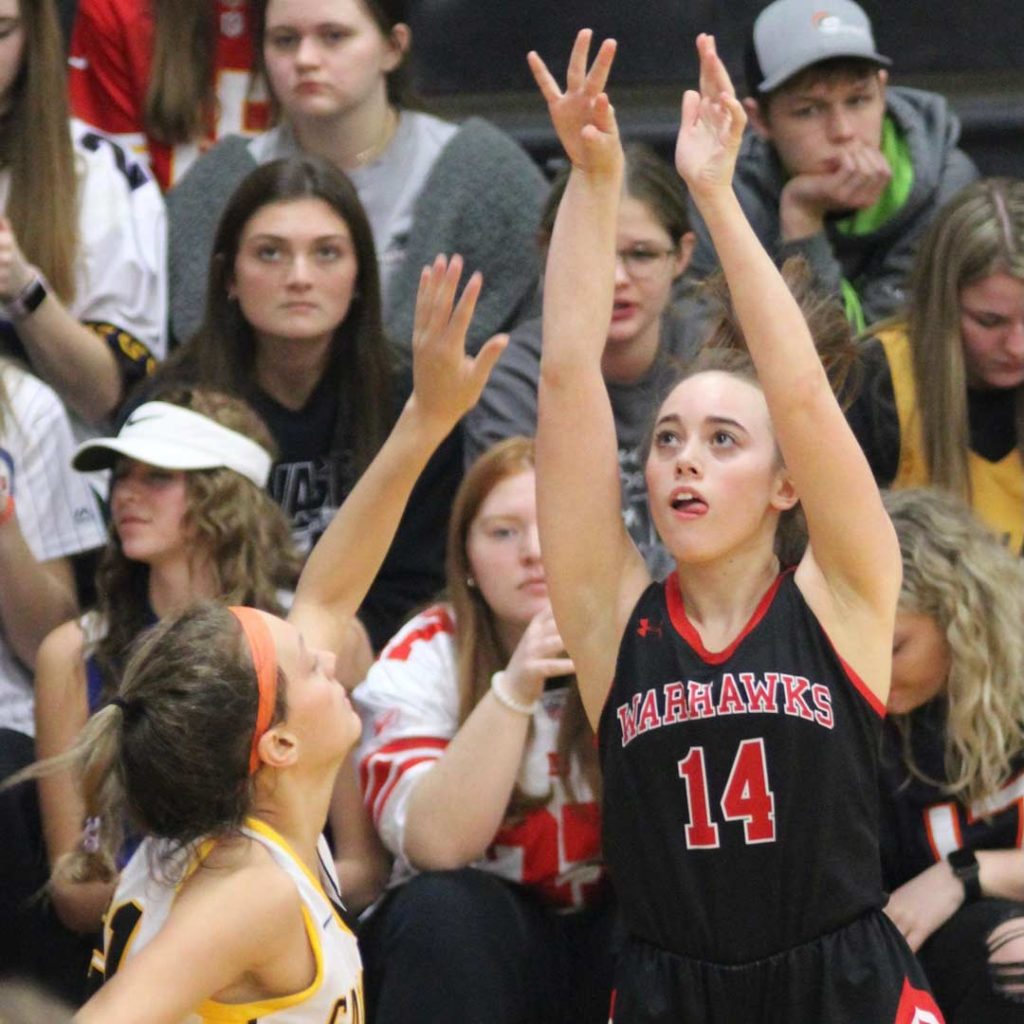 Sigourney was 35 percent from the floor in field goals to 32 percent for North Mahaska. NM held the rebounding edge 29-26.

“Free throws were big for us tonight,” said Moore. “We were really exhausted after that emotional win Tuesday. Bre (Fogle) played hard tonight. I wanted to take her out but really couldn’t.”

Fogel contributed 15 points for the Warhawks.

Rain Barthelman had a strong night for Sigourney with 23 points including gong 4-for-4 from the arc. She grabbed six rebounds two assists and two steals. Barthleman scored 10 of her points in the final five minutes of the game.

“I thought Rain played one of the best games this season,” said Tremmel. “That is probably the most she has scored this season.”