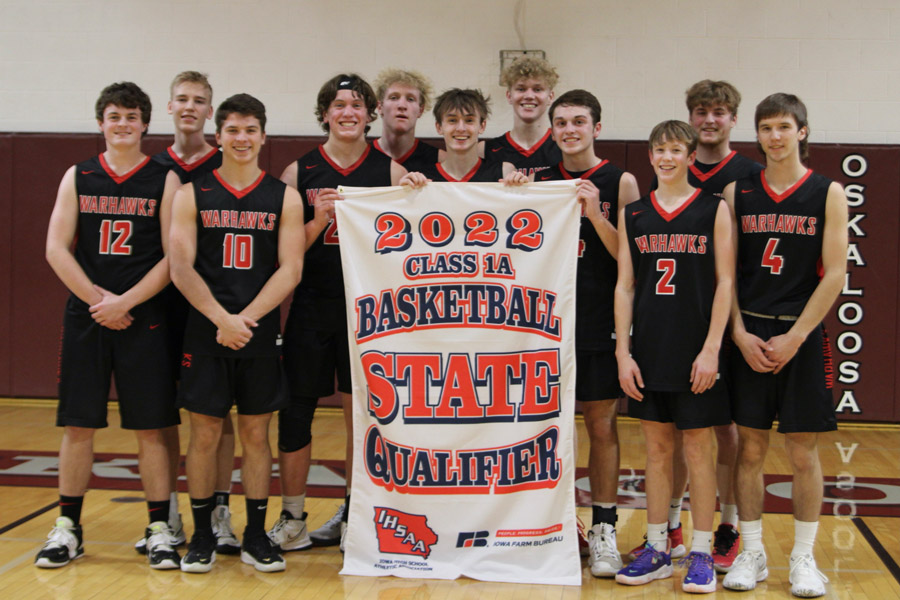 Saturday’s game was the third meeting of the two conference rivals. North Mahaska won the December meeting 77-45 at Sully while the Hawks came to North Mahaska and won 51-45 on Jan. 28.

Saturday’s game saw 3-pointers raining from the rafters as the teams combined for 11 made trifectas. However, North Mahaska won the game from an unlikely spot – the free throw line. The

Warhawks were 12-for-17 at the line while Lynnville-Sully went to the line four times hitting two.

The game was much tighter than the score may appear. Lynnville-Sully held an early 8-3 lead then a trifecta a layup by Lane Harmon gave North Mahaska the 14-12 edge after one period. It was tied just before half when the Hawks’ Josh Hardenbrook rang in a three with 10 seconds left to give L-S the 23-20 lead at intermission.

Defensive intensity reigned supreme as the Warhawks came out of the locker room and Lynnville-Sully managed just eight points, four in each of the final two quarters.

“For us to play man-to-man when we haven’t played man-to-man that much, defense is what put us in this position,” said North Mahaska coach Seth Streebin. “We had a good game plan. We tweaked it just a little. We knew we wanted to be all over Mason Rodibaugh because he hit seven 3-pointers on us last time and we weren’t going to let him do that again.

“We wanted to check Connor Maston because he’s a handful. He works his butt off on defense and is tough on offense. In second half, we knew we were in good position with fouls that we could be aggressive. Braden (Steel) picked up three quick ones, but he is a smart player an knew how to adjust.”

Lynnville-Sully hit a free throw 30 seconds into the third quarter but did not score again until the 4 minute mark when Rodibaugh drilled the only Hawk trey in the second half for a 27-25 lead. NM sophomore Nolan Andersen hit a bucket and Harmon rang in his second trifecta of the game to give the Warhawks a 30-27 edge entering the final frame. Nash Smith stepped up and drained a long ball as North Mahaska extended its lead 30 seconds into the fourth quarter.

NM’s defense created turnovers and on the offensive side controlled the basketball and led 33-27 before Ryan Anee scored the first points for the hawks at the 3:15 mark. From there it was hitting free throws for North Mahaska. In the final three minutes the Warhawks went 9-of-11 at the charity stripe to seal the victory and state berth.

“This is exactly what I wanted,” said junior Lane Harmon. “We knew in second half we had to come out and rebound. Once we rebound, we knew we could push the ball up the floor. First half was back and forth but at halftime we knew we were going to come out and take it at them. Free throws down the stretch that was huge.”

Rebounding was a big key as North Mahaska outrebounded the Hawks 29-17.

“Klayton Van Dyke is a very tall human being and rebounds very, very well so we knew we needed to box him out ,so he didn’t get second chance opportunities next to the basket,” said Streebin.

“Nash did a phenomenal job boxing him out.”

Junior Ethan Huffman led all scorers with 14 points, five of those came at the free throw line in the final 1:29.

“We knew they were going to foul, and I was able to go to the line and hit the shots,” said Huffman. “We talked at halftime that we would have to play better D and we did.”

Harmon finished the game with 10 points. Smith just missed a double-double with nine points and 14 rebounds. Steel scored nine points with six rebounds. Huffman and Smith each recorded a block.

The victory is especially exciting for the NM faithful as the girl team qualified for this week’s girl’s state tournament.

“You could see after the girls won on Wednesday that our energy and sense of urgency increased in practices after that,” said Streebin. “We fed off of it for sure.”

“That is so special that we are both going,” added Harmon. “The whole town will be behind us and support us at the Well. It’s one of the dreams for us to make it, but to have both there is special.”

Harmon and his coach are the only team members with experience at state. Harmon qualified for the state cross country meet in 2020 and Streebin was a member of the Bedford squad who made the state tourney in 2008.

“We will enjoy this moment then get to work next week,” said Streebin. “It is a great feeling. I am so proud of these guys and what they have accomplished.”