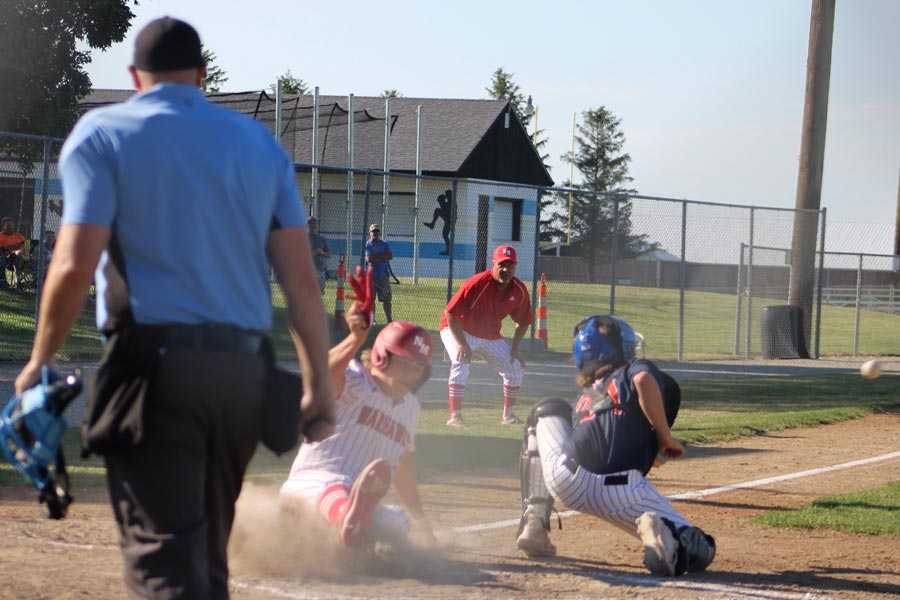 North Mahaska’s bid for a state tournament berth went a step further Saturday night when the Warhawks scored a run in the bottom of the eighth inning for a 7-6 victory over Colfax-Mingo.

North Mahaska (15-7) led 5-2 after five innings until C-M (4-15) added two runs in the top of the sixth inning. Not to be outdone Ben Johannes scored after hitting a single and coming home on a ball hit by Drake Hall.

In the top of the seventh junior Nash Smith exited the game when he reached the maximum pitch count. He had a solid game going 6 1/3 innings yielding four runs on three hits with two walks and 11 strikeouts. Smith would end up with no decision in the game.

Senior Jaydyn Steil came in for relief and gave up two hits and a walk. A couple stolen bases and a pass ball allowed the Tigerhawks to score a pair of runs to tie the game. In the North Mahaska half of the seventh, senior Sam Terpstra reached on an error and stole second but was thrown out at third trying to steal.

Sam Terpstra slides home as Will Zook awaits the ball in the fifth inning to give North Mahaska a 5-2 lead over Colfax-Mingo. C-M rallied to tie the game before North Mahaska scored in the bottom of the eighth to win 7-6.

Steil retired the Tigerhawks in order in the top of the eighth. With one out Johannes reached on an error and moved to second when freshman Lucas Nunnikhoven reached on an error. A wild pitch moved Johannes to third and with two out junior Drake Hall slipped a single into left to bring home the winning run.

“Defensively we played well,” said North Mahaska skipper Kevin Kelderman. “There are a couple things we have to work on. We left guys on base because we couldn’t get the key hit, but I told them to stay focused. It’s a matter of different guys stepping up at different times.”

Senior Dodge Duke drove in four runs in the game on a single and double. Hall drove in two runs with a single. Terpstra and Johannes also hit singles.

Cael Bracewell had the big bat for Colfax-Mingo scoring three times on a double and an RBI. Nathan Sloan hit two singles.

North Mahaska will return to Sully Tuesday to take on Lynnville-Sully in the District 10 semifinal. Game time is set for 7 p.m. The victor advances to the district final against the winner of Highland and Hillcrest Academy on July 9.