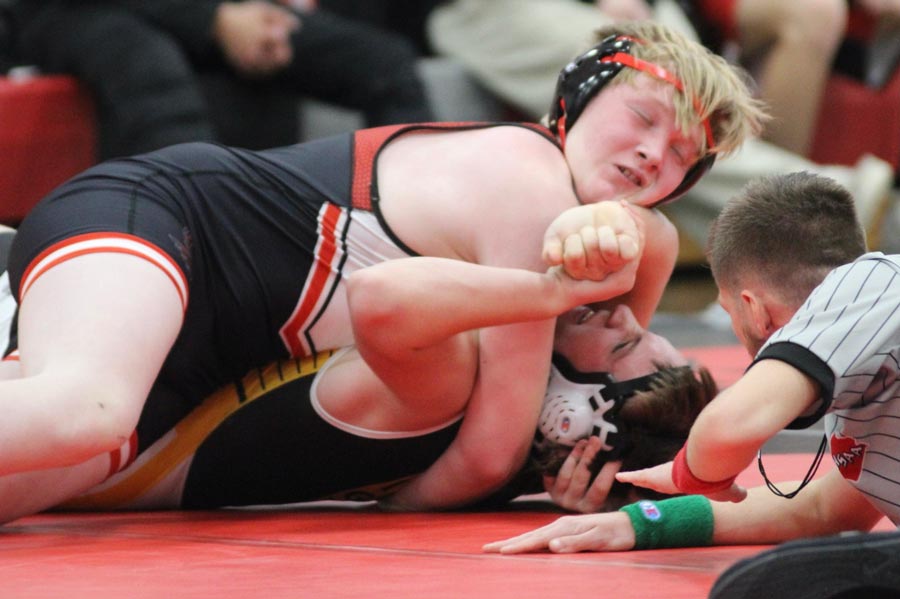 Injuries and illness have plagued the North Mahaska wrestling team as they begin the 2022-23 campaign, but not the spirit. The Warhawks opened the season with a 42-29 win over New London and fell to an experienced Lisbon team 63-12.

The Warhawks filled 11 of the 15 weights with seven freshmen, three juniors and a senior. In the match with New London, North Mahaska won seven matches including four forfeits and three pins.

The most dramatic match of the night was also the shortest. At 145 pounds freshman Gage Reis shot out at the whistle took down New London’s freshman Killian Kelly for a pin in six seconds. Another NM freshman, Dylan Meland pinned

Gavin Menke-Bailey in 3:31at 132 pounds. Freshman Alex Meland also earned a pin with a fall over sophomore Braylon Hamilton in 3:47.

North Mahaska faced Lisbon in the night’s finale. The Lions was the state runner-up in Class 1A a year ago with three state qualifiers taking the mat.

North Mahaska earned a forfeit by freshman Max Read and an exciting pin by freshman Ryan Groom at 113 pounds.

Groom was taken down by Lisbon’s Jackson Knapp and Groom reversed the advantage to tie the match 2-2 going into the second period. In the second minute of the second period Groom exerted his muscle and pinned Knapp in 3:37.

“We have a big, talented freshman class,” said NM coach Ryan Groom. “They are stepping into the positions and roles they need to and working hard. They are making an impact where we need them to.”

Junior Gage Vande Voort had the Warhawk faithful cheering and the Lisbon crowd on edge at 285 when he faced Wyatt Smith, who placed sixth at last season’s state meet. Vande Voort began his wrestling career this season two weeks ago.

Smith held an 8-4 lead after two minutes. Vande Voort kept escaping from Smith’s hold and had Smith scrambling before fatigue and experience combined to give Smith the win by fall at the 3:37 mark.

“Gage V is coming along very well for the short period of time he’s been in the room,” said Coach Groom. “He is eager and willing to learn.”

With injuries and illnesses there will be a number of wrestlers get chances to strut their stuff. Senior heavyweight Trace

Goemaat and senior 145-pounder Paul DeJong are among those experience wrestlers working through injuries.

North Mahaska (1-1) travels to Lynnville-Sully Thursday. They will meet the host Hawks along with Colfax-Mingo and Belle Plaine.