North Mahaska had a tall order when they hosted Pella Christian in a nonconference basketball game Monday night. The Eagles were taller or same height across the lineup and created havoc for host North Mahaska. Free throws lifted NM to a 44-38 victory.

Neither team had a strong shooting night but had spurts that gave each other a run. The teams traded baskets and leads throughout the first 12 minutes of the game. Leading 15-13, North Mahaska’s Breckyn Schilling drilled a 3-pointer, Sydney Andersen added a buck then Schilling ripped a jumper to take the lead 22-13. PC’s Karis Fikkert hit a basket with 38 seconds to play in the half. Regan Grewe answered for the Warhawks, and NM led 24-15 at the break.

North Mahaska (8-1, 5-0) maintained a 32-25 edge after three quarters when PC made a run. Maggie Heiner hit a 3-pointer, Faith Kacmaryinski and Joslyn Terpstra each hit buckets to cut the lead to 35-32. Schilling knocked down a trey at the 4 minute mark and added a pair of lane runners to build a 40-32 advantage. In the final Minute North Mahaska hit 4-of-5 free throws to seal the win. 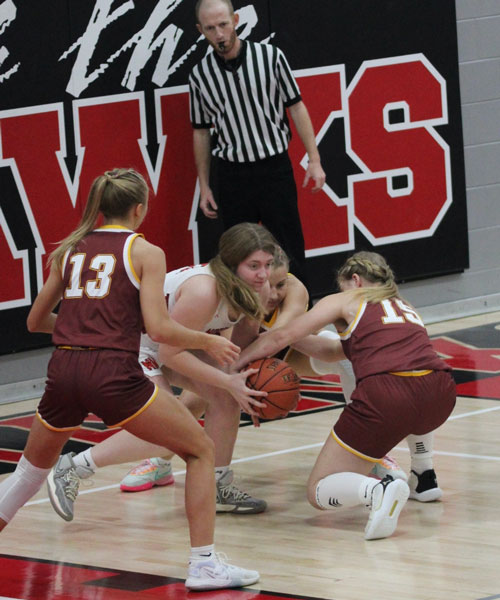 “We did not have our heads into it tonight, but they showed determination to win it,” said NM coach L.E. Moore. “We turned the ball over too many times. We learned some things tonight.”

Schilling scored 15 second half points to finish with 26. Regan Grewe finished with five points. Jessica Castaneda led the team in rebounding with 10 and four steals. Schilling had three steals and two blocks. 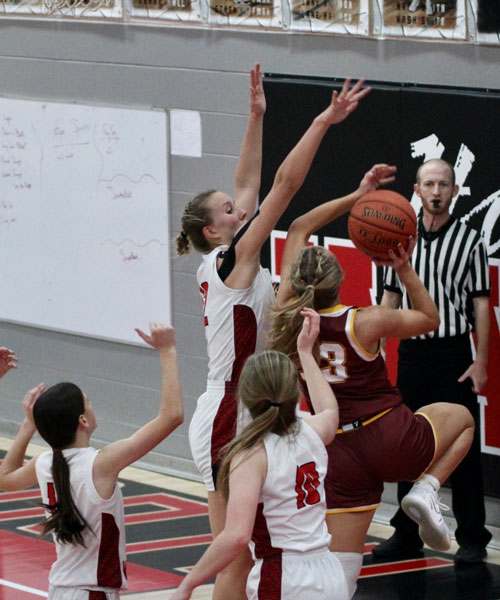 Breckyn Schilling of North Mahaska blocks a first half shot by Joslyn Terpstra of Pella Christian. NM won the contest 44-38.