North Mahaska’s boys’ basketball team was clicking on all cylinders Tuesday when they hosted English Valleys in a South Iowa Cedar League contest. North Mahaska shot 62 percent from the floor including a 50 percent clip from 3-point range to roll past the Bears 96-44. All 11 players scored for the Warhawks. It was also the second time in as many games they scored in excess of 60 points in the first half.

Senior Ethan Huffman opened the game for North Mahaska hitting a pair of 3-pointers and hit four of the treys on the night to finish with a game-high 23 points. NM posted 34 points in the quarter while English Valleys posted a respectable 15. By halftime the Warhawks had all but put the game on ice leading 66-25 and playing with a continuous clock in the second half.

The NM starters begam the second half before giving way to the reserves midway through the third period.

“It was a good way to end the first half of the season,” said North Mahaska coach Seth Streebin. “When we are making good passes and can get out and run, we are successful. Ethan gave us a big boost to start the game.” 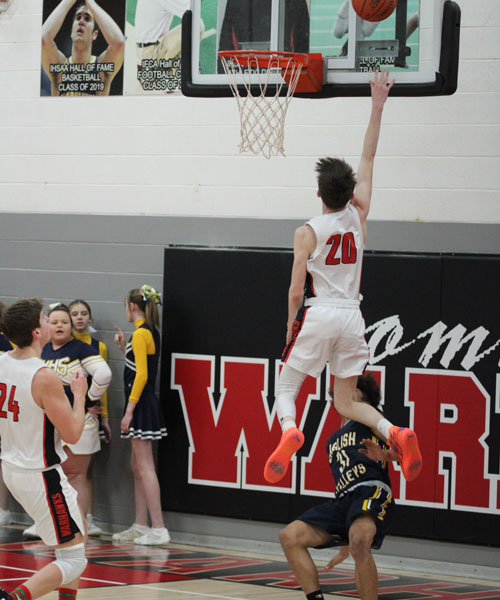 Ethan Huffman (20) soars to the basket over English Valleys’ Kehsaun Lundy for two of his 23 points. Huffman led North Mahaska past the Bears 96-44.

North Mahaska had 12 turnovers but many of those came late in the game, but they forced 18 turnovers on steals.

“Our defense really got us going,” said Streebin. “We forced the turnovers, and our rebounding was strong too.”

“Braden plays hard and is not selfish with the ball,” said Streebin. “He’ll pass the ball and works hard on the boards.”

North Mahaska improves to 7-2 overall and 6-1 in South Iowa Cedar League play. They will return to action on Jan. 3 when they travel to Iowa Valley. English Valleys falls to 1-8 overall.